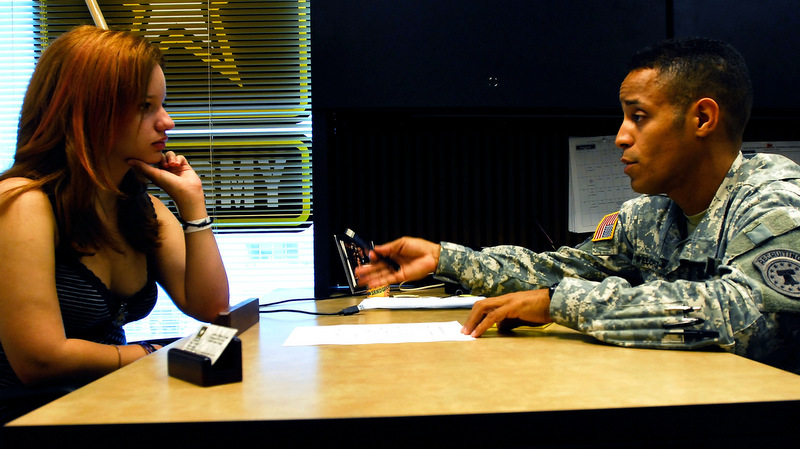 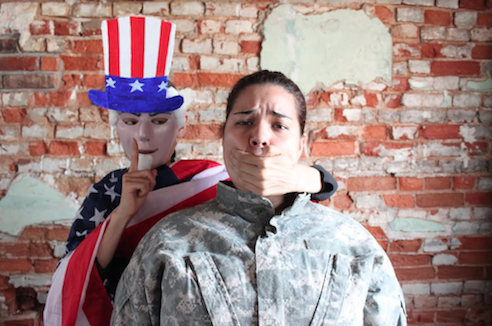 Enlistment in the Armed Forces is a very important decision. |español

Before enlisting, think carefully about what it means to be a soldier for eight years. Every member of the military, from the medic to the mechanic, is trained to fight and to kill, and the ongoing conflicts prove that fighting and killing can begin very suddenly. You may enlist to get job training or money for college, but eventually you may be faced with war. You owe it to yourself to think seriously about when you believe it is justified to kill another person.

Many of the details about enlistment are not well explained to people considering joining the military. Recruits may not understand the specifics of the enlistment agreement, the possibility of recruiter fraud, the limitations of college funding available through the military, and the problems faced by veterans when they leave the armed forces. It is important to learn all you can before you join. Remember that if you enlist, and decide you don’t like it, you cannot quit.

When You Visit the Recruitment Office:

The enlistment agreement is not a contract. It is a one-way agreement that is binding upon the recruit but not binding upon the military. The agreement states that the enlistee is “entitled to receive pay, allowance, and other benefits, as provided by law and regulation.” However, the enlistment agreement also states, “Laws and regulations that govern military personnel may change without notice to me. Such changes may affect my status, pay, allowances, benefits, and responsibilities as a member of the Armed Forces REGARDLESS of the provisions of this enlistment/reenlistment document.”

This language means that the military does not have to honor any promises made at the time of your enlistment. You, however, must give eight years of your life, obey all orders, and possibly kill or be killed. You may be subject to health hazards, discrimination, and emotional or physical abuse. Your superiors may decide to cut your pay or benefits without even telling you. Even the job placement that the recruiter promised you may be changed at a moment’s notice. If you refuse to obey orders, you may be disciplined, face a court martial, and perhaps receive a dishonorable discharge.

Any potential recruit should realize that his or her recruiter is not a teacher or a counselor but a salesperson. Recruiters are under great pressure to enlist a certain number of people each month; if they don’t, they may lose privileges, bonuses, and may be transferred from the recruiting command. Recruiter fraud has become a serious problem in the military. Four hundred recruiters were relieved in a three year period for misconduct. Sometimes recruiters try to convince enlistees to lie on the enlistment agreement – to provide false information so that you will be accepted into the service. They may also lie to you or to your family.

In the “Record of Military Processing,” for instance, you will be asked questions concerning your character and social adjustment. These questions concern previous drug use, involvement with communism, whether or not you are a conscientious objector to war, and whether you have previously been in trouble with the military. All of these categories are considered character defects by the military, and anyone who fits these categories is considered unfit for the military. When filling out the enlistment form, recruiters frequently suggest that you lie – particularly in this section. Do not lie. When fraudulent information is uncovered, often the recruit is the only one punished.

Recruiters almost always say that the military is exciting and adventurous – that you’ll learn a skill, earn money for college, and gain leadership and discipline. Your recruiter is selling something. Many of the promises are simply not true.

The recruiter will probably emphasize the high-tech, state-of-the-art, sophisticated equipment that you will get to work with. True, some soldiers are trained for the highly skilled jobs. Generally, however, those jobs go to the soldier who was already trained, educated, and technically skilled before joining the military. Many of the high-skill jobs will go to soldiers who already have at least two years of college. And often the high-tech work is done by civilian contractors who have the necessary training and skills.

In reality, few military assignments could be described as high-tech, although many of the jobs sound high-tech. For instance, one U.S. Army brochure includes assignments with titles such as, “combat engineering,” “general engineering,” “supply and service,” and “food service.” These assignments, and others offered by the military, would likely offer little more than low skill, manual labor. The armed forces simply do not have the time, the need, or the resources to train many recruits for highly skilled work.

Above all, the military exists for war. Most soldiers will be trained to fight and to kill, skills which aren’t marketable in the civilian world. It is, therefore, not likely that you will be able to transfer expertise gained in the military to a civilian career. A study from The Ohio State University showed that only 12 percent of the men and 6 percent of the women in a sample group made any use of their military skills in a civilian job. The Medical Corps specialist, for instance, may get credit only for “first aid” when he or she applies for nursing school.

Many people join the military for college money; the Army advertises providing up to $60,000 for college. Yet to receive that amount of money, you must accept a hard-to-fill military job category; you must complete your term of enlistment, and you must receive a good discharge. Even if you meet all these criteria, your commander may decide that you are still ineligible for some or all of the money. Soldiers who decide that they are unable to attend school loose all the money.

Between the rising costs of higher education and the multiple restrictions the army places on scholarship monies, many soldiers find that the money they do receive from the military is not enough to afford to go to college. Few soldiers find the educational opportunities the military claims to provide. Martin Smith, a veterans employment representative, figures that only 20 percent of the veterans he has worked with took extra classes in the service and that “those 20 percent seemed to be the smart kids anyway.”

RACISM IN THE MILITARY

The military has policies to overcome racism in its ranks. Despite its authoritarian structure it has not succeeded.

During the current wars, Arabs have been labeled “towel-heads” or “sand-niggers,” while there were reports of cross burnings and KKK gatherings on military grounds. During the Persian Gulf War, for example, half of the troops deployed were black while white soldiers were more likely to remain in the U.S. or be stationed elsewhere.

The few opportunities that exist in the military benefit primarily educated, white soldiers. While one-third of the enlistees are people of color, only 11 percent of the officers are. Non-white enlistees tend to get low skill, combat-related jobs. Disproportionate numbers of African-Americans and Latinos face courts martial and receive bad discharges. One out of three black GI’s will get a bad discharge.

WOMEN AND THE MILITARY

The unspoken message that the military continues to convey is that war is for men and women should stay away. Half of all women in the military are assigned to traditional roles such as cooking, nursing, and secretarial duties.

Rape and sexual harassment occur frequently in the armed forces. One report stated that 64 percent of women in the military have experienced sexual harassment. Often men use rank to try to get sexual favors. Women who refused to comply have been labeled lesbians.

And after you leave the armed forces ...

Soldiers are often discharged with no money to continue in the civilian world and no transferable job skills. Unemployment lines are filled with veterans who are poorly qualified and lack the useful skills for civilian employment. Many veterans remain jobless for long periods and are a large part of the homeless and prison populations. Even those who are gainfully employed will remain behind their civilian counterparts in income and advancement for the rest of their careers. Once you have been in the military, you can’t catch up with the rest of the world.

The military stays with you in other ways as well. Much of the appeal is the idea of proving yourself, developing discipline, being “all you can be.” Perhaps you want to carry “army pride” with you all your life. Remember, however, that this is only part of the picture. No one can participate in violence and remain either unscarred or indifferent. You will always be part of the destruction you supported. And if the United States does fight a war, you may never be able to forget the people you killed. For some people the weight of these memories is too heavy to bear. The suicide rate among Vietnam veterans is many times the national average.

Enlisting in the military is a serious commitment. Before you join, know what is in the fine print. Learn all the details and choose what’s best for you. Think about it.