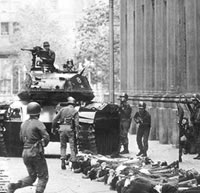 Militarism is a value system that stresses the superiority of some people over others. Under militarism, the people deemed inferior are dehumanized as enemies who must be overpowered by any means necessary. Those who deem themselves superior are permitted to take whatever they want from others — land, freedom, natural resources, cultures, lives — by force.

Militarism derides cooperation, equality and nonviolence, and instead enforces strict hierarchical relationships. Hierarchical systems create a winner at the top and render all others losers, so in a desperate attempt not to be a loser, each individual or group struggles to keep others down. As long as it is possible to see someone else as inferior, even those victimized by the hierarchy believe it is beneficial and continue to endorse it.

This same value system creates racism, sexism, homophobia and other types of discrimination. It is not surprising that these types of discriminatory behavior are inherent in military systems. The artificial creation and dehumanization of an "enemy" is used to manufacture hatred of certain groups of people and fuel wars. The system is so powerful that it does not stop with the enemy: within the military itself, women, ethnic minorities, gays, lesbians and others are treated as inferior due to their religion, language, nationality or other identities.

Militarism is the root cause of many of the global and domestic problems we face today. Solutions to these problems will only come about when enough people actively challenge this destructive way of thinking. This must include challenging and resisting the influence of the most powerful purveyor of militarism, the military establishment itself.

Here are some recommended links that offer other arguments against militarism and war. This is a work in progress and NNOMY will be adding new documents as they are prepared and as policies change that effect enlistment. Check back periodically.

Organizations you should know:

Articles on the web: