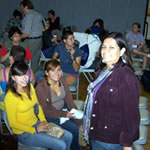 Nearly 300 people from across the nation poured into the Friends Center in Chicago and Roosevelt University the weekend of July 17-19, 2009 for the National Network Opposing the Miltarism of Youth Counter-Recruitment and Demilitarization Conference. The faces represented what the counter recruitment movement is all about and how it has grown over the past years from a handful of established organizations to a vibrant grassroots movement with the intermixing of youth and adults. Representing organizations from approximately 35 states they included the very young (from 12 years of age) to the seasoned activists. The people themselves, including veterans, youth, educators, parents and community activists manifested the growing diversity that this movement has embraced.

CAMS was one of the organizations heavily involved in the planning of the NNOMY conference. We invested hours of planning, fundraising and organizing for the conference and also brought along a team of 8 youth and 4 adults from the Los Angeles area. We presented 4 workshops. They were: Demilitarzing Schools the LA Way, which included the Garfield HS SOCIAL JUSTICE ACADEMY and CAMS. Students Sheila Sicairos, Juvenal Mendoza, Rosett Botello, Jazmin Casas, Nellie Cortez-Rodriguez and teacher Claudia Rojas shared about the development of the Academy and I shared about its connection to the CAMS Adopt a School Program. Additionally Michelle Cohen shared about alternatives to militarism and partnered with a team including youth activists from the Carolinas . Suzie Abajian presented the militarization of education with a teacher from Chicago who has experienced the corporate take over of the Chicago Schools. I co-facilitated a discussion about Global Perspectives on Militarism with an organizer from the War Resisters League, and moderated the Friday night panel on "Education, Militarism and C-R- where we have come from and where we are going." The participants from various sectors of the community shared their points of view as students, a conscientious objector, a long time C-R organizer and an activist/researcher in the Chicago Schools. The Chicago model under Secretary of Education Arne Duncan?s leadership was discussed, which has shut down public schools and opened up brand new military academies of "choice." And an analysis of the history of Counter-Recruitment movement was provided with the need for a long term strategy. Students shared about the activism they have initiated in their schools and the importance of adult mentors and teachers. The event ended with the awarding of a certificate and graduation cap to David Morales a student who was denied graduating on stage because of his activism and opposition to the firing ranges in the San Diego Unified School District.

On Sunday we viewed the synthesis of issues, actions and resources needed as identified in the 33 workshops held on Saturday. Break out groups and a general session was set up to focus our work on specific goals and strategies to collaborate on in the coming year. This included the following: developing resources for youth by youth including a list of music and videos with youth appeal, organizing a national campaign and research around JROTC, centralizing the resources on expanded alternatives for states, understanding and using new data and technology to track the enlistment, military programs and the military van schedule. We discussed various literature and training needs and encouraged everyone to send materials to the www.nnomy.org web site.

I feel that the NNOMY conference embraced the grassroots organizing movement which has emerged over the past 5 years and intentionally created the space for unrepresented groups to be validated. It was important to reach out to communities across the nation and offer scholarships for travel. This was made possible by grants from the Rose and Sherle Wagner Foundation, Resist, Inc, AJ Muste and many national and local organizations and individuals. Additionally CAMS had fundraisers including art shows, events and a letter appeal to meet all our funding needs. Persons left the conference feeling empowered and equipped with some key strategies and tools to take back into their communities. For example, the day following the conference a veteran had already initiated contact with his school district to find out about the Opt Out and ASVAB policies, and other activists came back and have started linking with other organizations.

I saw the youth from Los Angeles personally grow and soak up the experience, applying it to some further steps back home. One is ready to reactive the peace club at Venice HS, several are working on sharing their stories on the radio for KPFK Pacifica, and two community college students are collaborating on developing art projects for CAMS. Brian Wells, a student at Pasadena City College was inspired to organize other students on campus as they face devastating budget cuts. Can a weekend really make that much difference? I believe that the youth will never forget the experience, and I believe that the conference signified the uniting and turning point of the counter recruitment movement in an unprecedented way.

NNOMY is just a network of 188 organizations around the country organizing around demilitarizing our schools and presenting alternatives. Yet it is a significant resource that empowers and enhances bottom up grassroots organizing. It shows us how effective we can be when we unite and share strategies, tactics and approaches from around the nation. And in our analysis of the privatization of education and increasing militarism in the schools (via JROTC, military academies, and infused in the value and structure of the educational system itself) our work will also keep pace in addressing the militarism in our schools and broadcasting the alternatives. We are the new face of the counter recruitment movement.