Keep NNOMY aware of the latest news from your organization at This email address is being protected from spambots. You need JavaScript enabled to view it. so we can share it with the national network.

Online: Visit NNOMY Peace on Facebook to see all our Friends

Online: Visit The National Network Opposing the Militarization of Youth on Facebook to see who likes us

We have grown out of struggle against war and cuts to education in New Jersey. We formed at a banner making party on March 6, 2010.Our goal is to educate youth about war and its impact on its victims, including those being killed and the youthful soldiers being ordered into combat. We will organize educational meetings, leaflet distribution, music and theatrical presentations and other means of communication and dialogue. We also will educate around the issues of how a war-based economy contributes to joblessness, homelessness, inadequate education and other economic crises domestically.

Veterans for Truth is a volunteer organization of men and women of all ages, branches and eras of military service. We are committed to giving young persons, their parents and/or guardians, educators, clergy and all others, with a qualified assessment of the often immoral and illegal practices employed by the war industry in its militarization of our public schools. SafePassageNetwork.org monitors the practices of the military in our public schools and advocates education about the pros and cons of a career in the military so that every American student can make an informed choice. We provide coverage of the entire 13-year path to public education.

Mothers Against the War is a community-based organization for peace for mothers, families and friends who oppose the war as a way of dealing with national or international disputes and the use of torture to extract information from the prisoners. We fight for Puerto Rican youth not to sign a military contract and the health of our military families.

Tim Bigelow is a high school teacher and counter-recruitment activist on the Pacific Island of YAP. Yap is totally supported, as are the other states in THE FEDERATED STATES OF MICRONESIA, by US Govt. funding through a compact agreement. This came about following 50 years of the TRUST TERRITORY AGREEMENT following WWII.

In 2005 Yap was devastated by a large typhoon. Pres. Bush sent in FEMA and rescued the island with supplies, tools and assistance.Pres Bush ( and the military) has since become a legend in the eyes of the Yapese, FEMA also, following an American formula, handed out large amounts of cash to the islanders. Military recruiters come in and literally harvest the best and brightest students.

Each December, Tim makes his annual presentation to the students. He makes a difference, but many students find the military the easiest way out of Yap and their way to the THE PROMISE LAND OF AMERICA.

The Committee Opposed to Militarism and the Draft / From Draft NOtices, October—December 2011

Repeal of DADT: How It Helps and How It Doesn’t 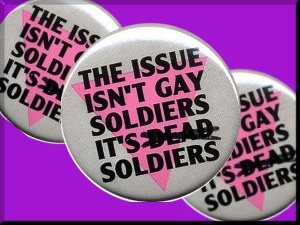 Kathy Gilberd — On September 20, lesbian, gay and bisexual (LGB) service members and veterans, as well as their many supporters, held parties and events around the country to commemorate the official repeal of the military’s policy commonly known as “Don’t Ask, Don’t Tell” (DADT). Just what is the impact of this change?

DADT was the latest in a long line of policies prohibiting homosexual conduct (in reality, prohibiting homosexuals) in the military. DADT was itself a small victory, since it (1) prevented military officials from asking about military members’ sexual orientation without cause and (2) allowed LGB members to serve as long as they were silent about their orientation. The policy reduced the number of anti-gay witch-hunts and mass investigations that had accompanied prior policies, and also reduced the number of involuntary discharges. But DADT allowed members to be discharged for simply stating that they were gay, or using words or even gestures to that effect. In addition, homosexual acts and marriages were grounds for discharge under DADT, and the policy was so broadly defined that even a kiss or hug was often sufficient for discharge. Under this policy more than 13,000 service members were discharged.

Dear LGB Youth… Now that you can enlist, please don’t.

Since Don’t Ask Don’t Tell (otherwise abbreviated as DADT) was repealed on September 20th, just about everyone’s had something to say. Homophobes are vocally opposing it and LGBTQ people and their allies are celebrating. Some queer soldiers took the opportunity to come out, including the one in this video that’s currently going viral. As someone who simultaneously supports LGBTQ rights and an end to all wars, I didn’t know how I should react to the end of DADT.  On one hand, it opens up a lot of benefits for veterans who were previously discharged for their sexuality and enables soldiers to marry and enter civil unions with their same-sex partners.