In the first decade of the twenty-first century, video games are an integral part of global media culture, rivaling Hollywood in revenue and influence. No longer confined to a subculture of adolescent males, video games today are played by adults around the world. At the same time, video games have become major sites of corporate exploitation and military recruitment.

In Games of Empire, Nick Dyer-Witheford and Greig de Peuter offer a radical political critique of such video games and virtual environments as Second Life, World of Warcraft, and Grand Theft Auto, analyzing them as the exemplary media of Empire, the twenty-first-century hypercapitalist complex theorized by Michael Hardt and Antonio Negri. The authors trace the ascent of virtual gaming, assess its impact on creators and players alike, and delineate the relationships between games and reality, body and avatar, screen and street.

Games of Empire forcefully connects video games to real-world concerns about globalization, militarism, and exploitation, from the horrors of African mines and Indian e-waste sites that underlie the entire industry, the role of labor in commercial game development, and the synergy between military simulation software and the battlefields of Iraq and Afghanistan exemplified by Full Spectrum Warrior to the substantial virtual economies surrounding World of Warcraft, the urban neoliberalism made playable in Grand Theft Auto, and the emergence of an alternative game culture through activist games and open-source game development.

Rejecting both moral panic and glib enthusiasm, Games of Empire demonstrates how virtual games crystallize the cultural, political, and economic forces of global capital, while also providing a means of resisting them. Source: Publisher

The New American Militarism: How Americans Are Seduced by War

Edward A. Olsen The Independent Institute - 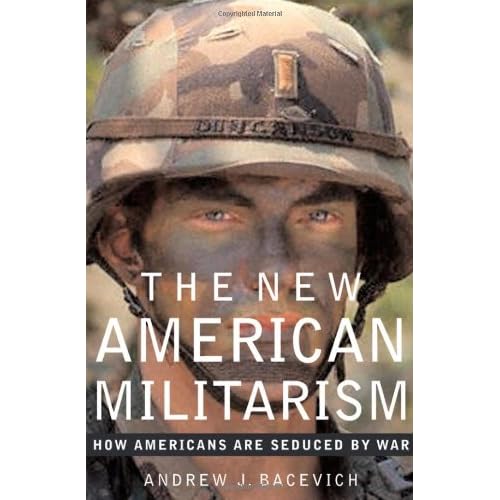 As Andrew Bacevich notes in the introductory section of The New American Militarism, most critics of militarism's influence on U.S. foreign and defense policy have their roots in the progressive or center-left portions of the ideological spectrum. Bacevich's roots clearly are in the traditional conservative to libertarian end of that spectrum. A graduate of West Point, he earned a Ph.D. at Princeton University. After a military career, he became a professor at Boston University. This background reinforces his credibility in critiquing how and why militarism became a major factor shaping U.S. policy. The author also of a previous, well-received book, American Empire: The Realities and Consequences of U.S. Diplomacy (New York: Cambridge University Press, 2002), Bacevich has become an established critic of U.S. policy. His excellent analysis of American militarism reinforces that stature.

The essence of his views is encapsulated by statements at the beginning and end of the book: "Today as never before in their history Americans are enthralled with military power" (p. 1); and "America will surely share the fate of all those who in ages past have looked to war and military power to fulfill their destiny. We will rob future generations of their rightful inheritance. We will wreak havoc abroad. We will endanger our security at home. We will risk the forfeiture of all that we prize" (p. 225). After referring to "America's marriage of a militaristic cast of mind with utopian ends," Bacevich declares that his goal is to examine "the origins and implications of this union and [to propose] its annulment" (p. 3). As a devout Roman Catholic, he avoids the term divorce, but in this case an annulment would be a de facto divorce. For conservatives who might be uneasy about this objective, Bacevich sets the tone for the book by quoting James Madison: "Of all the enemies of public liberty, war is perhaps the most to be dreaded.... No nation could preserve its freedom in the midst of continual warfare." He then states, "The purpose of this book is to invite Americans to consider the relevance of Madison's warning to our own time and circumstances" (p. 7). Thus, Bacevich seeks to refocus Americans' attention on how the United States has gone astray from its founders' principles.

Despite the title's emphasis on "new American militarism," most of the book deals with how and why "present-day American militarism has deep roots in the American past" (p. 5) by assessing that history and its policy implications then and now. The successive chapters provide provocatively conveyed insights into various aspects of that long-term evolution. Bacevich sets the stage with a critique of Wilsonian interventionism and its legacy to date. This analysis is balanced in its criticism of various administrations. At the core of its salience for militarism are observations about "the demise of the ancient American tradition of the citizen-soldier" (p. 26) and the claim that "the outsourcing of defense to a professional military elite, the erosion of civilian control—distorts if it does not altogether nullify important elements of the American birthright" (p. 32). Against that background, Bacevich carefully analyzes how the cultivation of military professionalism, an inadvertent by-product of Wilsonianism, assumed self-regenerating momentum. This discussion contains many insights drawn from Bacevich's background in both military and policy analysis. Readers who lack any military background should benefit from it, but some may find it arcane if they fail to grasp its nuances.

The chapter titled "Left, Right, Left" will have much broader appeal to all but the neoconservatives whom it thoroughly evaluates and whose flawed conservative credentials it closely examines. Bacevich contends that neoconservatives "laid the intellectual foundation of the new American militarism" (p. 72), and he analyzes the elements of that foundation and how they evolved from the views of dissenting leftists to those of supposed conservatives. In assessing these pseudoconservative issues, he skillfully critiques the roles of the Weekly Standard, many of its prominent writers, "the fellow-traveling American Enterprise Institute," and "the agitprop of the Project for the New American Century" (p. 89).

Genuine conservatives will enjoy the following two chapters less. One chapter deals with the legacy of Ronald Reagan's role in "conjuring up the myths that nurtured and sustain present-day American militarism" (p. 99) and how that legacy helped shape successive administrations. As controversial as that analysis will be in some circles, the other chapter's focus on the religious right's alleged roles in reinforcing the values behind militarism will be even more provocative. Bacevich maintains that "militant evangelicals imparted religious sanction to the militarization of U.S. policy and helped imbue the resulting military activism with an aura of moral legitimacy" (p. 124). The content and title of this chapter, "Onward" (as in "onward Christian soldiers"), is likely to make it the most controversial in the book among today's Republican base.

The chapter titled "War Club" is much less likely than "Onward" to provoke controversy, but it does deal with a sensitive issue: the institutionalization of the doctrines that foster militarism in the current Bush administration. Bacevich examines the analysts in academe and think tanks, especially RAND, who contributed to what became a quest for a perpetual "revolution in military affairs" (RMA) designed to keep the United States poised for deterrence in ways that eventually led to the Bush doctrine's focus on military preemption. At the core of this development was an evolving "national-security elite" that Bacevich labels a "priesthood." (p. 151). Although the purposes behind the RMA concept can have merit, it proved to have troubling implications. As Bacevich states, "although the Revolution in Military Affairs offered a way of reconceptualizing warfare, its importance extended well beyond that sphere. In fact, the RMA was one expression of a larger effort to formulate a new vision of the world itself and of America's proper place in (and astride) that world" (p. 170). In short, he concludes, "the priesthood had turned out to be a war club" (p. 174).

Bacevich explores how U.S. policies toward the Middle East over several decades have been shaped and distorted by oil and by radical Muslim reactions, including terrorism, in response to those policies. In this context, he refers to the Cold War as "what it really was: World War III" and to the post–9/11 war on terrorism as "World War IV" (p. 175). Although many readers will disagree with that analytical categorization because of its reliance on a neocon perspective, Bacevich uses that paradigm to provide insights into where and how presidents from Jimmy Carter to George W. Bush have used interventionist policies to impose American objectives on the Middle East, based on U.S. dependency on petroleum stability and U.S. ties with Israel, in order to transform countries that were not in harmony with U.S. interests. In one of his blunter assessments, Bacevich states: "Bush and members of his inner circle conceived of this [aggressive interventionism] as a great crusade" (p. 202) in part because "they had drunk deeply of the waters that sustained the new American militarism" (p. 203).

In concluding, Bacevich expounds on ten principles that can reduce U.S. tendencies toward militarism: pay attention to the nation's founders, bolster the separation of powers, treat the use of armed force solely as a last resort, strengthen U.S. self-sufficiency, emphasize national defense, control defense spending, use more soft power, emphasize citizen-soldiers, use the National Guard and reserves properly, and improve U.S. civil-military relations. Were the United States to pursue these goals, including greater reliance on civilian education for U.S. military officers, Americans would benefit from the demilitarization of U.S. policy and the U.S. role in world affairs. These recommendations are sound. If implemented, they would reduce militarism sharply within U.S. society and in U.S. policymaking and help to stop the policy shift toward the maintenance of a de facto empire.

As I noted earlier, a number of liberal-progressive analysts have criticized militarism in the United States. However, Bacevich's criticism and recommendations, voiced by a conservative with military credentials, are important for people across the entire U.S. spectrum to read and heed. Liberals may be pleasantly surprised. Although some conservatives may be taken aback, they too will benefit, as will anyone in the civilian or military departments of the U.S. government regardless of his ideological inclinations.

Buy The New American Militarism: How Americans Are Seduced by War at Amazon.com for $18.48 (hardcover)