Counter-Recruitment and the Campaign to Demilitarize Public Schools 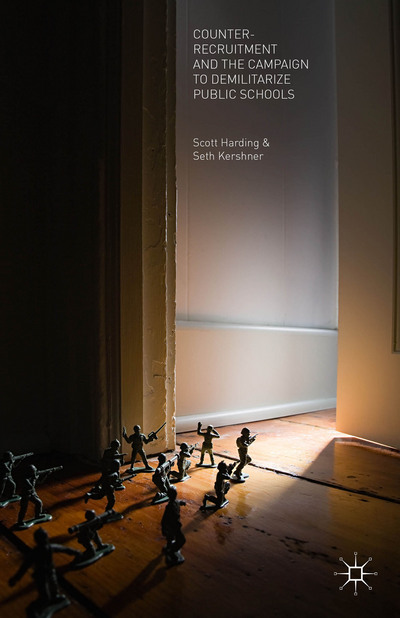 "This book brilliantly dissects not only the militarization of schools in the United States but also offers a systemic approach to forms of counter-recruitment. Not content to simply condemn military recruitment of students, the book offers parents and others a ray of hope in developing a language, strategies, and policies that can end this pernicious militarizing of schools and the recruitment of young people into America's ever expanding war machine. A must-read book for fighting back against militarized pedagogies and strategies of repression." - Henry Giroux, McMaster University, Canada, author of The Violence of Organized Forgetting (2013)

"What does sustainable anti-militarization look like? Who does it—and how? This fascinating book pulls back two curtains, first on how American high schools are being steadily militarized, and second, on how thoughtful, committed local counter-recruitment activists are rolling back that militarizing process, school by school, town by town. For any of us in critical security studies, American studies, peace studies, education, or women's and gender studies, this is a genuinely valuable book." - Cynthia Enloe, author of Nimo's War, Emma's War: Making Feminist Sense of the Iraq War (2010)

The United States is one of the only developed countries to allow a military presence in public schools, including an active role for military recruiters. In order to enlist 250,000 new recruits every year, the US military must market itself to youth by integrating itself into schools through programs such as JROTC (Junior Reserve Officers' Training Corps), and spend billions of dollars annually on recruitment activities. This militarization of educational space has spawned a little-noticed grassroots resistance: the small, but sophisticated, "counter-recruitment" movement. This book describes the various tactics used in counter-recruitment, drawing from the words of activists and case studies of successful organizing and advocacy. Counter-recruiters visit schools to challenge recruiters' messages with information on non-military career options; activists work to make it harder for the military to operate in public schools; they conduct lobbying campaigns for policies that protect students' private information from military recruiters; and, counter-recruiters mentor youth to become involved in these activities. While attracting little attention, counter-recruitment has nonetheless been described as "the military recruiter's greatest obstacle" by a Marine Corps official.

Scott Harding is Associate Professor and Associate Dean for Academic Affairs at the School of Social Work, University of Connecticut, USA. He has extensive advocacy and organizing experience on issues of homelessness, affordable housing, welfare, community development, and transnational labor solidarity. He was Executive Director and Policy Coordinator for the California Homeless & Housing Coalition, USA. He is a Board Member of Integrated Refugee and Immigrant Services (IRIS), and former Editor of The Journal of Community Practice.

Seth Kershner is an independent writer and researcher whose primary focus is the US military's growing presence in public schools. His work has appeared in a number of academic journals and books, as well as popular outlets such as In These Times, Rethinking Schools, and Sojourners, among others. Kershner currently works as a reference librarian at Northwestern Connecticut Community College, USA.

War is a Crime Against Humanity: The Story of War Resisters' International