The De-Militarization of Colombia. Ending US Military Presence: Pillage, Promise and Peace 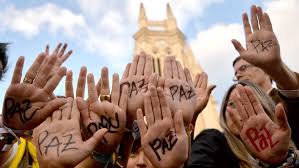 We live in a time of great destruction and grand economic opportunities and Latin America is no exception. In the global context, the US Empire is engaged in destructive wars ( Afghanistan , Iraq , Pakistan , Libya , Yemen , Somalia and Haiti ). In contrast China, India, Brazil, Argentina and other “emerging economies” are expanding trade, investments and reducing poverty. The European Union (EU) and the United States (USA) are in deep economic crises. The EU “periphery” ( Greece , Ireland , Portugal , Spain ) are totally bankrupt. The US “dependencies” in North America ( Mexico ), Central America and the Caribbean are virtual narco-states plagued by mass poverty, astronomical crime rates and economic stagnation. The US dependencies are plundered by foreign multi-nationals, local oligarchs and corrupt politicians.

Colombia stands at the crossroads: it can follow in the footsteps of its predecessor, narco-President Alvaro Uribe and remain a military dependency, a lone outpost of the US Empire in South America . Colombia can remain at the margin of the most dynamic world markets and at war with its people or via a new socio-political leadership it can effect a profound reorientation of policy and consummate a transition toward greater integration with the dynamic markets of the world.

Colombia has all the objective ingredients (material and human resources) to be part of the dynamic new order. But first and foremost it must shed its role as the militarized vassal of the United States and an object of exploitation by a rentier oligarchy. Colombia must cease backing US coups ( Honduras , Venezuela ) and threatening its neighbors ( Ecuador ).

Colombia cannot develop its productive forces and finance the modernization of higher education and upgrade technical training and expend billions on the hundreds of thousands of military, paramilitary, police and intelligence operatives. The military repressive apparatus is directed at repressing the most productive, creative e and motivated sectors of the labor force. Prosperity depends on civil peace which depends on the profound demilitarization of the Colombian state. The connection between economy and military is clear. China spends one tenth of the US military budget but grows five times faster. Brazil ’s independent foreign policy and realignment with the Asian market has led to high growth, while Mexico , as a satellite of the North American Free Trade Treaty, is a stagnant, failed state.

De-Militarization: The Specificities of Colombia:

Colombia is the most militarized society in Latin America , with the highest number of civil society victims. “Militarism” in Colombia includes the largest active military force operating within state boundaries and being the largest recipient of military financing from the greatest militarist power in the world. As a subordinate client of the US Empire, Colombia has the worst human rights record, as far as the killing of journalists, trade unionists, peasant activists and human rights advocates.

State and para-state violence, however, is not random; over 4 million Colombian farmers, peasants and rural intermediaries have been forcibly dispossessed and their lands seized by big landowners, narco-traffickers, generals and businesspeople allied with the government. In other words State terror and mass dispossession is a peculiarly Colombian method of “capital accumulation”. State violence is the method to secure the means of production to increase agro-exports at the expense of family farmers.

In Colombia , state and para-state extermination replaces the market and “contractual relations” in effecting economic transactions. The unequal relations between a militarist state and popular civil society movements has been the principal impediment to a transition from an oligarchical political regime to a pluralistic representative democratic electoral system.

Colombia combines 19th century forms of elite representation with highly developed 21st century means of military repression: a case of combined and uneven development. As a result we find ‘unbalanced growth’; an overdeveloped military, police, paramilitary apparatus and underdeveloped social and political institutions willing and capably of engaging in negotiations through reciprocity and compromises within a civic framework.

The state culture of “permanent war” undermines the conditions of trust and reciprocity and raises unacceptable risks to any social and political interlocutors.

Within the militarized state – especially because of its deep-rooted links to regional US military institutions – only “negotiations” which reinforce the current socio-economic order and political institutional arrangement are acceptable. Even recognized “peace mediators” engage in one-sided “negotiations” demanding unilateral concessions from insurgents and rarely make demands for reciprocal concessions from the State.

Most Latin American countries which have gone through a transition from dictatorial rule to electoral politics have respected opponents; only Colombia has murdered the entire political leadership and activists – from the Patriotic Union – who converted from armed to electoral struggle. No other Latin American (or European or Asian)opposition has experience the state violence inflicted on the Union Patriotica (UP): the murder of 5,000 activists including Presidential and Congressional candidates.

South America ’s current center-left regimes, their thriving economies and the free and open social movement struggles, are a product of social upheavals (between 1999-2005) which ended ‘militarized politics’. Popular revolts in Bolivia , Argentina , Ecuador , and Venezuela cleared the way for the Center-Left. In Brazil , Uruguay and Chile social movements helped displace rightwing regimes.

Colombia is one of the few countries which have failed to make the transition from a right-wing militarist regime to a center-left welfare and development model, because unlike the rest of Latin America it has yet to experience a popular uprising, resulting in a new political configuration.

“Peace settlements” produce winners and losers and reflect the external and internal correlation of forces. The process of negotiation, including who is consulted in setting priorities and making concessions ,is central to the future trajectory of the “peace process”.

Recent history provides us with two diametrically opposed ‘peace processes’ with dramatically different consequences: the Indo-Chinese peace settlement of 1973-75 and the Central American peace settlements of 1992-1993. In the case of Indo-China and more specifically the Vietnamese-US peace settlement, the National Liberation Front (NLF), secured the withdrawal of the US military forces, the dismantling of US military bases and the de-militarization of the state. The NLF agreed to a process of political integration based on the recognition of certain basic socio-economic and political reforms, including agrarian reform, the repossession of farms by millions of displaced peasants and the prosecution of civilian and military officials charged with crimes against humanity. The FLN negotiators made political concessions but were in close consultation with their mass base of peasants, workers and professionals. They upheld the principle of democratizing the state and demilitarizing society as essential conditions for ending the war.

Over the past 35 years, Vietnam has evolved from an independent socialist toward a mixed public-private capitalist economy, transiting toward higher growth and higher living standards but increasing inequalities and greater corruption.

In contrast, the Central American peace agreements signed by the guerrilla leaders led to the end of armed conflict and the incorporation of the insurgent elite into the electoral system. However, there were no basic changes in the military, economic and social system. None of the mass popular organizations were consulted. The bulk of the armed fighters, both popular insurgents and paramilitary mercenaries, were discharged and became an army of “armed” unemployed. Over the past 20 years, criminal gangs have taken over large swathes of Central America, while the ex-Farabundo Marti guerrilla elite and their Guatemalan/ Nicaraguan colleagues, have become affluent businesspeople and allied with conservative electoral politicians. They are protected by private bodyguards and oblivious of the conditions of 60% of the population living below the poverty-line. The “peace accords” in Central America served as a vehicle for social mobility for the guerrilla elite. They did not end the violence. Every year more people meet a violent death than were killed during the years of civil war.

The Vietnamese and Central American peace agreements took place during different international moments. In the 1970’s the Soviet Union and China provided broad international material and political support to the Vietnamese. During the Central American peace negotiations, the Soviet Union disintegrated, China was turning to capitalism and Cuba was facing a “special period” of economic crises because of the loss of Soviet aid and trade.

Clearly the change in the international correlation of forces influenced but did not determine the unfavorable results in Central America . In less than a decade after the disastrous Central American peace accords, Venezuela , under President Chavez, proceeded to defeat a coup and advanced toward a socialist transformation. Popular revolts overthrew neo-liberal rulers in Argentina , Bolivia , Ecuador and elsewhere. The end of the USSR did not end successful class struggles in Latin America .

The reactionary political correlation of forces of the 1990’s has changed dramatically. By 2011, only Central America , Mexico and Colombia remain as islands of reaction in a sea of resurgent leftism and popular struggles in South America, North Africa and South Asia .

The Central American peace settlement, with its acceptance of the militarized state, linked to agro-mineral export elites and narco-criminal gangs has become a monument for a failed “peace process”. The Vietnamese peace settlement, while far from perfect, at least has provided peace, security, agrarian reform, and higher income for the peasantry and workers. No doubt Colombia has historical and structural differences with Central American and Indo-China.

The armed social movements in Colombia have a specific history which preceded the Central Americans insurgents by many years and has developed political ties with certain regions and social movements which have endured over time. Unlike Central American and Vietnam insurgents they are also not dependent on “external” supporters. Above all the failed experience with “political reconciliation” in Central America has caused Colombian insurgents to raise significant conditions regarding the peace process, namely demilitarization and socio-economic reforms (agrarian reform and land recovery for the dispossessed). “Peace at any price” will only lead to new and equally virulent forms of violence, as is the case today in Mexico with 10,000 killings a year 7,000 murders a year in El Salvador and an equal amount of homicides in Guatemala .

The Vietnam experience of peace via social justice and de-militarization seems to ensure a modicum of prosperty. Certainly the international correlation of forces has dramatically improved. Latin America has replaced neo-liberal puppet regimes. The Latin American economies have found dynamic Asian markets independent of the US . Popular revolts in the Middle East and Asia – from Tunisia to Afghanistan are forcing the US military to retreat. The international and regional context is very favorable if Colombia can take advantage of it. The method and modes of struggle ,those which unite popular movements without distinction, should be openly discussed and resolved without exclusions . The insurgency is part of the solution, not the problem. The key to a successful dialogue is the demilitarization of the state-ending the US military presence, terminating Plan Colombia and converting military spending to economic and social development.