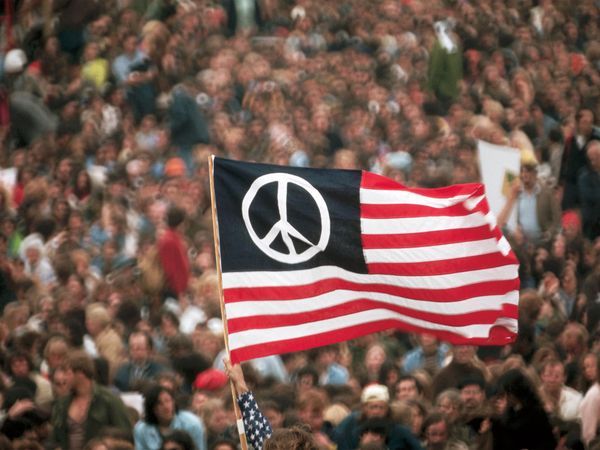 Throwing money at war does nothing to address the real issues we face. We, the youth of our country, are the ones who will feel this pain. The cost of war is sucking us dry; it is burdening us with debts we will never be able to pay back.

And war doesn’t even work to create jobs. Politicians say they can’t cut the Pentagon budget because the weapons manufacturers create much-needed jobs. Yes, our generation need jobs. But if members of Congress really wants to use federal spending to help us find employment, the military is the worst investment. A $1 billion investment in military spending nets 11,600 jobs. The same investment in education reaps 29,100 jobs. Whether it’s education, healthcare or clean energy, investments in those sectors create many more job opportunities than the military. The military-industrial complex does a great job lining the pockets of politicians; it does a lousy job creating an economy that works for all.

War does not work from a national security and defense perspective

The war apologists claim war makes our future “safer” and “freer.” But since the tragic 9/11 attack, the US military response has made the world a more dangerous place. The invasions of Iraq and Afghanistan, the NATO bombing of Libya, the use of predator drone strikes in Pakistan and Yemen, and countless other examples of military operations have only increased violence and hatred. Iraqis and Afghans are certainly no safer and freer; we are certainly no safer and freer.

We refuse to let our brothers and sisters, both here and abroad, die for access to cheap Persian Gulf oil. The Iraqis, the Afghans, the Iranians, the Libyans, the Somalis, and the people of any other country our military circles like vultures, are not our enemies. They oppose terrorism more than we do; they are the ones who must bear its brunt. We must oppose US intervention not because we don’t care about them, but because we do.

War does not work from an environmental perspective.

War is not environmentally friendly. It never has been, and it never will be. Bombing destroys the environment. It damages forests and agricultural land. It ravages ecosystems, endangering species, even forcing some into extinction.

Bombing contaminates water and soil, often leaving it unsafe to use for centuries, even millennia. This is especially true with nuclear and chemical weapons, such as those dropped on Hiroshima and Nagasaki, or the missiles containing depleted uranium the US used in Iraq. And because of weapons like these, infant mortality, genetic mutation, and cancer rates are exponentially higher in the civilian areas targeted. Children in Fallujah, Iraq, a city hit hard by these weapons, are born without limbs and missing organs.

The environmental costs of war are clearly not limited to isolated moments; they persist for many lifetimes. Heavy military vehicles, in conjunction with deforestation and climate change, lead to the emission of toxic dust from the ground. Even if their homes and livelihoods haven’t been destroyed by bombs, citizens who inhale these toxins are much more susceptible to a wide variety of diseases and health problems.

The US Department of Defense has long been the country’s largest consumer of fossil fuels. Military vehicles consume obscene quantities of oil for even small tasks. If we truly care about reversing, or at least mitigating, anthropogenic climate change—what many scientists recognize as a literal threat to the future of the human species—eliminating war would be an incredibly effective first step.

War does not work from a human rights perspective

The world isn’t any safer and freer for the million Iraqi civilians who died. How is freedom supposed to come at the tip of a bomb?

The debate rages back and forth; “specialists” fill the TV airwaves, repackaging the same tired excuses we’ve heard for years. Most of these “experts” are old white males. The people actually affected by our bombs and our guns--mostly young people of color--are nowhere to be seen. Their voices are silenced, their voices shouted over by the corporate media, by hawkish politicians, and by the profit-hungry military contractors. <

War does not work from a historical perspective

War has never been about freedom and liberation; war has always been about profit and empire. American historian Howard Zinn once said “Wars are fundamentally internal policies. Wars are fought in order to control the population at home.”

Defenders and purveyors of war have always done empty lip service to ideals like “freedom” and “democracy”; they have always repeated tired, vacuous tropes about “assisting,” or even “liberating” peoples.

How can we trust a country that says its brutal military invasion and occupation is “humanitarian,” when, at the same moment, it is supporting repressive dictators around the world? Saddam Hussein was on the CIA payroll since the 1960s. While we were invading Iraq to “overthrow tyranny” and “free” the Iraqi people, we were supporting the King Fahd’s theocratic tyranny in Saudi Arabia, the brutally repressive Khalifa family in Bahrain, and Mubarak’s violent regime in Egypt, among countless other unsavory dictators.

When we invaded Afghanistan to “free” the Afghan people from the Taliban, the corporate media failed to mention that Ronald Reagan had supported the Mujahideen, who later became the Taliban, and the Contras throughout the 1980s. He called the latter “the moral equivalent of our Founding Fathers,” while they were disemboweling civilians in a campaign of terror.

These historical events are absolutely pertinent to contemporary discussions of war. We must learn from them, as to not repeat them in the future, as to not fall for the same past political tricks.

Our naysayers say we are against the troops. We are not against the troops. US troops are disproportionately from less-privileged backgrounds. Military recruiters target impoverished communities of color, and there are many recorded instances of them using deceptive tactics to get young citizens to sign long binding contracts. These are the troops that die in US military operations. They are not our enemies. We refuse to let our brothers and sisters be cannon fodder. The real people against the troops are the ones who send our country’s poor to die in rich people’s wars.