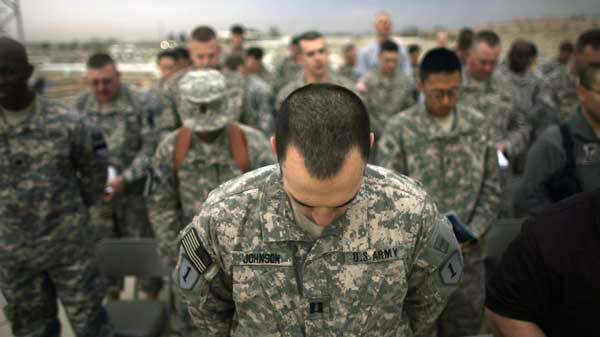 As one might suspect, the issue of cultural militarism and religion has evoked some controversial opinions from voices within differing religious persuasions, that are questioning the ethicacy of declaring ones religious beliefs while supporting  militarism and the role that has assumed internationally. The following snippet introductions represent different mainstream religious takes on this dichotomy and links to the full articles. All offer thought provoking discussions on the inherent problems and contradictions that lie between adopting a statist and a religious doctrine into your belief system simultaneously.

Militarism creates a convenient blind spot for the terrible costs of war. At its most bold, it dares and encourages young people to sacrifice their lives, and possibly their souls, at the unholy altar of the State.

When we thank veterans for keeping us free and safe, we reassure them that particular, current wars are good, and necessary to keep us free and safe. When we congratulate teenagers for joining the military, we discourage them from considering the spiritual and psychological consequences of violence, enmity, destruction and the taking of human life. When we champion the United States as “the greatest country on Earth,” we overlook the dark side of American history: American exceptionalism provides the rich soil in which militarism takes root.

A militaristic culture derives its power from a few basic assumptions:

1. Militarism discourages serious reflection on the moral gravity of war.

So, what’s wrong with militarism?

The military is the most respected institution in America. Americans associate military service with noble qualities and ideals, such as courage, strength, sacrifice, honor, loyalty, and heroism. Americans honor the U.S. military with special parades, ceremonies, monuments, and national holidays. We applaud American military exploits on television and in our films.  Americans often go out of their way to thank soldiers and veterans for their service and for keeping us safe and free. On the one hand, there is a belief in the right to self-defense or a belief that war is sometimes necessary as a last resort; on the other hand, there is the unchecked glorification of all things military. - READ MORE

Are American Evangelicals Seduced by Militarism? Are American Evangelicals Seduced by Militarism? Is militarism consistent with Christian faith?

American militarism. The very phrase evokes a cacophony of responses from the public, not least from the American Evangelical church. It’s undeniable that America is becoming more and more militarized, as several recent books have pointed out (e.g. Andrew Bacevich, The New American Militarism; Rachel Maddow, Drift). Some Evangelicals are quick to celebrate America’s military prowess—the bigger the better—while others see it as dangerous, if not idolatrous. For reasons state in this post and the next, I believe the latter: the American Evangelical church is largely (not completely) seduced by military might.

But what is “Militarism?” According to the New Oxford American Dictionary, “Militarism” is:

[T]he belief or desire of a government or people that a country should maintain a strong military capability and be prepared to use it aggressively to defend or promote national interests.

By “militarism,” therefore, I do not mean “the people participating in the military” (I myself come from a long line of Marines), but the overarching “belief or desire” of having a strong military to protect or advance national or religious interests. Not every member of the military, as several of my military friends have told me, actually buy into the overarching agenda of militarism.

Now, I would argue—and it’s hard to argue otherwise—that America is becoming more and more militarized. I would also argue (though no time in this blog to prove it) that America’s recent militarism is an aberration of its original ideals. For much of its history, America has been critical of militarism, seeing it actually as a threat of its own liberty (as thoroughly documented in Bacevich’s book). But such an argument is neither here nor there in terms of a biblical worldview. The nations will do what the nations will do. But the recent push for militarism is augmented by one significant—and quite bewildering—fact: the American Evangelical church has been leading the charge for the nation’s recent fascination and faith in military might.
- READ MORE

God, Not Militarism: Ultra Orthodox Jews Say No to Guns and Ammo 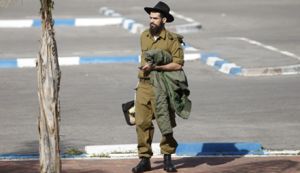 British Prime Minister David Cameron got more than he expected at the Israeli Knesset when he visited the country, receiving a cold shoulder from ultra-Orthodox and Palestinian legislators who share common interests, being the state’s most oppressed communities. Cameron’s visit to the Knesset took place on the same day that two controversial laws, the Conscription Law and the Governability Law, were finally approved following a prolonged legislative battle. As Prime Minister Netanyahu welcomed the guest of honour, the ultra-Orthodox parliamentarians  left the plenary session in protest while their colleagues, Palestinian Members of the Knesset, refused to attend the event altogether. This was the culmination point of several months of heated protest over the Conscription Law which brought to the surface contradictions between Zionism and Judaism.

Hundreds of thousands of ultra-Orthodox Jews (Haredim) of all denominations  took to the streets of Jerusalem to oppose the draft law several days before it passed. In a mass prayer, the worshippers-protesters declared their faithfulness to Torah study rather than to the military. United  under a banner declaring that “the State of Israel is fighting against the Kingdom of Heaven,” they held signs stating that military draft is spiritual suicide. The event was not merely showcasing opposition to the law, but nothing short of a battle cry against the very legitimacy of a state that encroaches upon their spiritual autonomy and poses a danger to their religious liberty. - READ MORE

Organizations about religion and militarism

Christian and church based counter-recruitment

Links to articles about religion and militarism