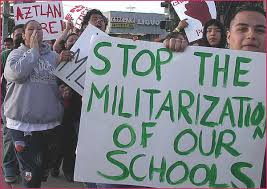 On February 14, 2018, the unthinkable but all-too-common happened. A mass shooting occurred at the Marjory Stoneman Douglas High School in Parkland, Florida. Rumors about the identity of the shooter were that he was a former student who had been in JROTC. One week later, on Democracy Now, Amy Goodman's guest was Pat Elder, the director of the National Coalition to Protect Student Privacy. This organization works to counter the access that the military has to students in high schools. Mr. Elder went on to state that the shooter was trained in the marksmanship program at the same high school. On the day of the murders, the shooter wore his JROTC shirt. Also, among the killed were three JROTC students.

Long Beach Recruitment Awareness Project (LB RAP) is an organization that has been working to safeguard the privacy of students through what we call truth-in-recruitment. Military recruiters in our school district can visit the schools almost any time they wish. They collect student contact information and use it to pursue them. We have documented cases of students who have been hounded by recruiters without their parents' consent and lured by false promises to join the military.

Our organization was aware that there were two JROTC shooting ranges in Long Beach Unified School District (LBUSD) -- one at Long Beach Polytechnical High School and one at Lakewood High School. I personally had knowledge of the rifle range at Poly High School because both of my children graduated from that school. LB RAP decided to put together a flyer and a petition and begin a campaign to rid the school district of these shooting ranges. On March 24, Long Beach had their own March for Our Lives rally that was organized by high school students in the area.  Long Beach Area Peace Network and LB RAP collected signatures and distributed our petition. Many people were shocked to learn that Long Beach Unified School District had these shooting ranges.

We also made this a political issue in the upcoming school board election. We went to candidates’ forums and got the candidates to speak about the issue. Both of the individuals running for the board of education were very supportive. One of them stated that closing these shooting ranges was a no-brainer. After conferring with Pat Elder and Rick Jahnkow of the Project of Youth and Non-Military Opportunities (YANO), we learned that many of these programs were supported by the National Rifle Association (NRA).  A local community leader who is not a member of the peace movement sent a Public Records Act request to the district in an effort to learn whether the NRA had ever donated money or in-kind donations to the JROTC programs at the schools. Although it turns out the NRA made no such donations, we speculate that this inquiry made the school district wary of scrutiny around the issue of shooting ranges.

There are some lessons to note from this campaign:

There is still an awful lot we need to do to educate the students and their parents about issues of privacy and the military's presence in schools. Also, while there are peace clubs at some campuses, we could use more at selected schools in Long Beach.I want to thank all the people that have been involved in Long Beach RAP and the Long Beach Area Peace Network for being so supportive.

Marshall Blesofsky is a long time peace activist who worked with the Boston Draft Resistance Group in the 1960s. He is a founder and chair of the Long Beach Recruitment Awareness Project in California, which organized to remove all JROTC shooting ranges from the Long Beach Unified School District.