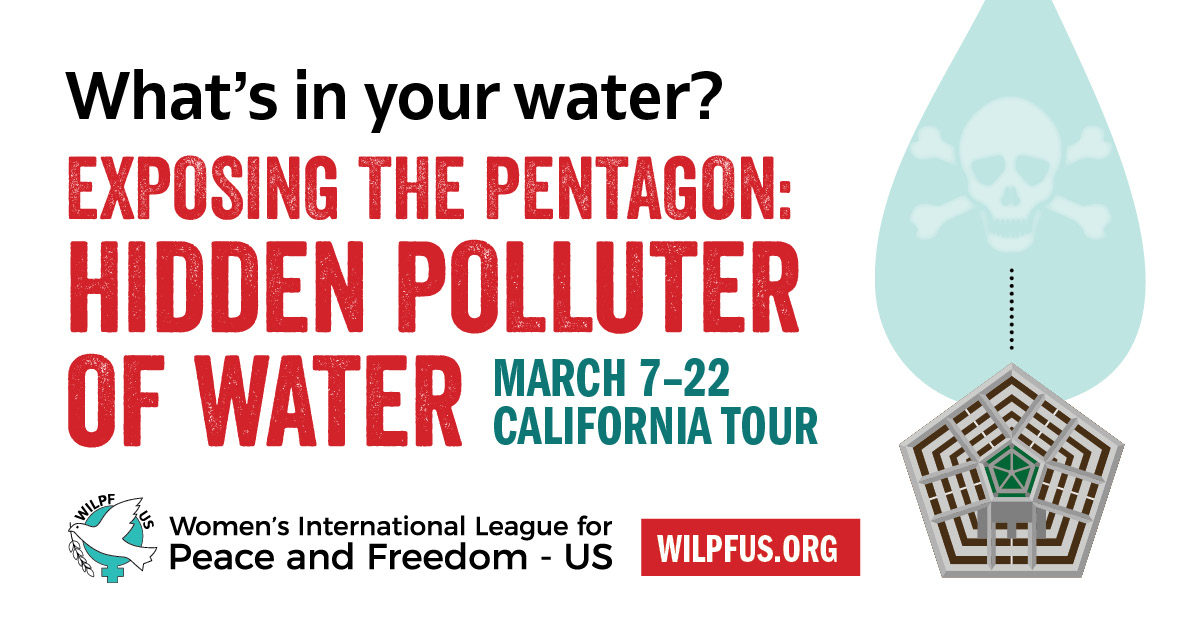 Truth in Recruitment activists could be providing youth, that are considering joining the military, important information about the health risks associated with serving on a base that is contaminated, and nearly all of them are according to the research done by the online resource, militarypoisons.org, a project of WILPF's Earth Democracy Project. 1.

The most recent Pentagon recruitment appeal to youth, "What's Your Warrior?" is a new campaign that focuses on the breadth and depth of roles the U.S. Army offers. Though belying the suggestion of the title, the focus is on non-combat roles that supposedly proliferate in current military service. Physical and moral injury is historically associated with combat operations so the campaign goal appears to convince youth influencers, be they teachers, or parents, and prospective inductees, that there is much less risk in serving in today's Army. But the growing awareness of the level and complexity of military base contamination is an opportunity to inform families and potential recruits of the harmful conditions that exist on multiple military bases. With the activist reports documenting not only harm to on-base service members and their families, but extending to adjoining communities, there are legitimate and reliable concerns that can be expressed to youth in high schools considering enlistment.

The EPA and Congress have allowed the military to continue using the carcinogenic foam while its use is being discontinued throughout the world. It is the loss of the EPA as a functioning regulatory authority and the influence of the chemical industry in Congress that has led the state of California to order the state’s water systems to establish the nation’s lowest notification levels for dangerous PFAS in drinking water.

​The Notification Level for PFOA in the Golden State has been lowered from 14 parts per trillion (ppt) to 5.1 ppt and the Notification Level for PFOS has been lowered from 13 ppt to 6.5 ppt. These are the lowest levels at which they can be reliably detected in drinking water using current technology. Meanwhile, municipal water systems throughout the state are struggling to provide drinking water that is not contaminated with these carcinogens. The state recently tested 568 municipal wells and found that half were contaminated with the cancer-causing chemicals.

​The new notification levels reflect the state’s recognition that the smallest amounts of these substances endanger human health. In fact, Harvard scientists say 1 ppt of PFAS in drinking water is potentially dangerous. State water officials say the new levels are “intended to protect against cancer and non-cancer effects, including effects on the liver and immune system.” 2.

Military personnel accounts of the reckless and unintended use of fire fighting foam on base for the purposes of hazing also indicates the lack of control that service members have to avoid contamination. On the website Civilian Exposure is shared the account of service members being doused with the foam as a right of passage upon being released from one base and transferred to the next. 3

Those families that live next to contaminated bases are also being affected as many communities draw their water from aquifers and connecting wells. These public water sources experience toxic leeching and contaminated plumes that exit the bases and enter into civilian water supplies. Levels of toxicity in half the wells tested in California, numbering in the hundreds, exceeded state recommendations for safe drinking water

The Pentagon and the, now industry controlled, U.S. Environmental Protection Agency, minimize the threat and will not expedite the testing on the PFOA/PFOS chemicals to address community health concerns and they are not officially recognized cancer causing substances as of yet. From the perspective of Truth in Recruitment activists, they may consider sharing some of the accounts of service persons that have their stories to tell that seem persuasive if not officially validated by these compromised and foot dragging agencies that are tasked with identifying human health risks. There are powerful videos and published accounts to share as resources for activists and you might even be able to get one of the contamination activists to make classroom visits to talk with students.

To find out more, visit the Civilian Exposure site online as well as the militarypoisons.org site. Both offer a substantial array of statistical data and collected stories to inform us and provide material to make appeals to those considering joining the military to take account of this public health risk

1. Drinking water sources for 7.5 million in CA are contaminated https://www.militarypoisons.org/testing.html