The reasons that the Women's March on the Pentagon is a women's march are many. Not only is there a historical precedent for a women-led antiwar march, women from all walks of life, from countries that have both been victims of and aggressors in conflict, from past generations or those living today, are adversely affected by war at far a greater rate than men. These claims are supported by statistics though those same statistics and realities of war are often swept under the rug or excused as necessary collateral damage. It is time for all victims of war to be acknowledged and for the victimization of women to end.

In 2004, Common Dreams reported that "women and children account for almost 80% of the casualties of conflict and war as well as 80% of the 40 million people in world who are now refugees from their homes." But the harm done to women due to conflict does not simply stop there. For generations, women have been traded as goods, their bodies treated as commodities or objects free for the taking, not only during actual combat but simply when they are at or in the vicinity of a military base.

Irene Khan of Amnesty International states that "women and girls are not just killed, they are raped, sexually attacked, mutilated and humiliated. Custom, culture and religion have built an image of women as bearing the 'honour' of their communities. Disparaging a woman's sexuality and destroying her physical integrity have become a means by which to terrorize, demean and 'defeat' entire communities, as well as to punish, intimidate and humiliate women." 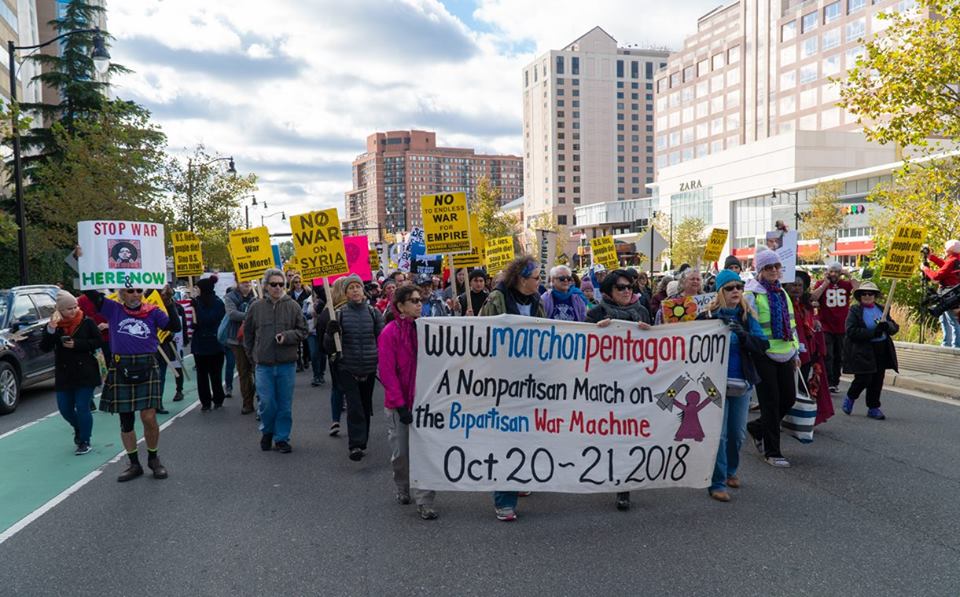 On October 21st, 2018 Women and Men Marched on the Pentagon.and the Pentagon is Marching on Generation Z in their Social Media, Video Games, and in their Public Schools to Sell them on Perpetual War. The domestic side of the Pentagon's reach into our lives is its efforts to recruit our youth into military service either in body or mind. The Women's March on the Pentagon is a demand for a sustainable world, where resources are not squandered on the business of war but redirected into human needs and not into corporate greed at the cost of enormous suffering at home and abroad. The other war front of the Pentagon is in our public schools where military recruiters troll for new recruits. This is another Pentagon that requires the demand for community activism to regulate access to our children and to limit the influence of militarized programs that masquerade as educational opportunities. Programs like JROTC, Young Marines, DoD Starbase and DoD STEM are a means of recruitment and indoctrination into a military ethos that normalizes war in young minds and ensures the continuation of the military and defense industry control over our national economy.

The Missing Link in the Gun Debate

America is up in arms about guns. If last month’s “March for Our Lives,” which attracted over one million marchers nationwide, is any indication, we’ve got a serious problem with gun violence, and people are fired up about it.

But what’s not being talked about in the mainstream media, or even by the organizers and participants in the March for Our Lives movement, is the link between the culture of gun violence and the culture of war, or militarism, in this nation. Nik Cruz, the now infamous Parkland, FL shooter, was taught how to shoot a lethal weapon in the very school that he later targeted in the heart-breaking Valentine’s Day Massacre. Yes, that’s right; our children are trained as shooters in their school cafeterias, as part of the U.S. military’s Junior Reserve Officers’ Training Corps (JROTC) marksmanship program.

Nearly 2,000 U.S. high schools have such JROTC marksmanship programs, which are taxpayer-funded and rubber-stamped by Congress. Cafeterias are transformed into firing ranges, where children, as young as 13 years old, learn how to kill. The day that Nik Cruz opened fire on his classmates, he proudly wore a t-shirt emblazoned with the letters “JROTC.” JROTC's motto? "Motivating Young People to Be Better Citizens." By training them to wield a gun?

Perhaps what’s key above all, however, is that JROTC, and U.S. militarism as a whole, is embedded in our sociocultural framework as Americans, so much so that to question it is to cast doubt on one’s patriotic allegiance to this nation.