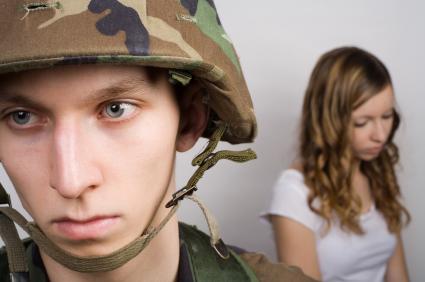 If you or someone you know is thinking about joining the U.S. military, here are some points to consider before you “sign on the dotted line.”

1. Military enlistments are potentially unlimited in length.
The box below cites “fine print” from the back of the first page of a military enlistment “contract.” It shows that, despite the stated length of enlistment (usually four years), recruits can be kept in the military indefinitely, or called back from the reserves many years later, especially as part of the “war on terror,” which has no foreseeable end. This is what’s been called the “back door draft.” Thousands have already been subjected to it. Recruiters typically neglect to mention these sections to potential enlistees.

(NOTE: The sections below are on the BACK of the contract):

FOR ALL ENLISTEES OR RE-ENLISTEES:

Many laws, regulations, and military customs will govern my conduct and require me to do things a civilian does not have to do.

The following statements are not promises or guarantees of any kind. They explain some of the present laws affecting the Armed Forces which I cannot change but which Congress can change at any time.<snip>
c. In the event of war, my enlistment in the Armed Forces continues until six (6) months after the war ends, unless my enlistment is ended sooner by the President of the United States. <snip>
b. If I am a member of a Reserve Component of an Armed Force at the beginning of a period of war or national emergency declared by Congress, or if I become a member during that period, my military service may be extended without my consent until six (6) months after the end of that period of war.
c. As a member of a Reserve Component, in time of war or national emergency declared by the Congress, I may be required to serve on active duty (other than for training) for the entire period of the war or emergency and for six (6) months after its end. See the full form at:
2007-military_enlistment-document.pdf

2. Recruiters’ promises are often false, or not kept.
In our GI counseling work, “My recruiter lied” is the most common complaint in our thousands of calls.
The reasons recruiters often lie are not hard to find: they are under tremendous and relentless pressure to meet recruiting goals. During wartime, many young people and their families are uneasy about the risks of military service.
Numerous journalistic reports have exposed recruiter misrepresentations. A collection of articles from numerous mainstream news sources describing proven cases of recruiter abuse is here (archived).

3. Military service often does not pay off in future job earnings.

Recruiters promise training that will lead to better jobs in civilian life. But several careful studies show that veterans typically earn 12% to 15% less than those workers who do not go into the military.
One reason for this discrepancy is that much military training is not useful in outside work. Another is the high proportion of veterans who experience PTSD and other problems that interfere with work. More information here (archived).

4. The hazards of military service include more than just getting killed or wounded.

For instance, less than 300 US soldiers were killed in combat during the first Gulf War of 1991. But over one hundred thousand Gulf War vets have reported chronic, debilitating physical and psychological disorders since serving in the Gulf. More information and links are here (archived).

Similar problems are already showing up in soldiers returning from the Iraq and Afghanistan occupations: rates of major depression, Post-Traumatic Stress Disorder and suicide are very high. Info on PTSD is here. Reports on high veteran suicide rates are here (archived) and here (archived).

5. Women in the military face a very high incidence of harassment and rape.

Recent studies and notorious cases show, as one report put it, that “sexual assault on women in the military may be common, and that those attacks leave physical and emotional scars on the female veterans long after they've left the service.” Moreover, military higher-ups often ignore or cover up these crimes. Two articles describing this epidemic of harassment and assault are here (archived).

The incidence of family abuse and violence in the military is three to five times higher than in the civilian population. A recent North Carolina study showed that children in military communities were twice as likely to be killed by their parents. These abuse patterns are intensified by the impact of a force stretched too thin in Iraq and elsewhere.
Heyman & Neidig, Jrnl Consulting Clinical Psychology 1999
Apr;67(2):239-42. See also this report from the Quaker House Newsletter (archived).
North Carolina Child Homicide Report is here (archived).

7. DELAYED ENLISTMENT PROGRAM: Persons who sign up for Delayed Enlistment and change their minds CAN get out of the program, relatively easily. Recruiters will often LIE about this, falsely telling people they will be arrested, go to jail, or (if immigrants) get their families deported. If all else fails, DEP members can simply refuse to report for enlistment. More information at: http://girightshotline.org/discharges/dep/fact-sheet/index.shtml

8. Benefits promised to veterans have been very hard to claim for many. Hundreds of thousands of applications for benefits are backlogged, and denials are very frequent. One report on this situation is here (archived).