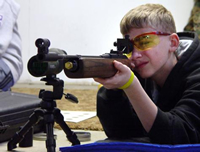 I’m following up from the NNOMY Steering Committee call last week.  We all agreed to come up with ideas for a campaign for the upcoming year. I started researching marksmanship programs associated with JROTC programs in the schools and came up with a heck of a story about the Obama administration allowing a huge shipment of surplus Army guns from Korea.  That led to the eye raising finances of a non-profit set up by Congress to peddle these guns to kids, which brought me to the poisonous nature of these firing ranges.  Be thinking in terms of ways to marshal the energy of a few dozen people reading this.

According to the conservative Human Events magazine, the U.S. State Department announced Dec. 2 that it will re-consider its stance against allowing World War II M-1 Garand rifles into the United States from South Korea.  “The Department will consider a new request from the Republic of Korea (ROK) to transfer its inventory of approximately 87,000 M-1 Garand rifles into the United States for sale on the commercial market,” a spokesperson at the U. S. Department of State told the magazine on Dec. 2.

I haven't been able to confirm this anywhere on line.

The Obama administration initially approved the sale of the American-made rifles in 2009, but it reversed course and banned the sale in March 2010.  Now, it is apparently reversing course again, if Human Events can be believed.  South Korea also holds 770,160 M1 Carbines in storage.  (We apparently thought we could get more Koreans to shoot Chinese.) Anyway, the M-1 Garands are likely to be made available to the public through the Civilian Marksmanship Program.

The CMP also assists with the management of firing ranges in public high schools and puts  weapons into the hands of thousands of American youth.  It was initially established by Congress in 1903.  The CMP Mission is to  “promote firearm safety and marksmanship training with an emphasis on youth.”  Their vision is to involve every American child in  marksmanship programs.  There are 4,806 clubs, high schools, teams and other shooting sports organizations currently affiliated with the CMP.

The program started in 1903 as a way to encourage individuals to develop marksmanship skill to prepare them in the event they were called to serve during wartime.  In 1996 Congress established a non-profit entity, The Corporation for the Promotion of Rifle Practice and Firearms Safety, Inc.  to carry on the work of the Civilian Marksmanship Program, although the organization is commonly known as the CMP

The Corporation for the Promotion of Rifle Practice and Firearms Safety, Inc has total assets of $150 Million and annual revenue topping $29M in 2009.  Their 990 for 2009 shows $124 M owned in publicly traded securities.  They received $20.8 M in government grants last year.

Their 990 says -- at not cost to the government -- they "develop curriculum for marksmanship instruction in the high schools,  train and certify JROTC coaches and inspect high school range facilities."  It's curious because CMP only spent $513,056 on these important items, especially the inspection of the ranges.  If there are 4,806 clubs affiliated with CMP and they only spent $513,056 on curriculum, training and inspections, the cost for all three per facility is a meager $106.

Direction for a new campaign

There have been numerous studies and press reports documenting health risks associated with firing ranges, but little activism to exploit the issue.  We need to come together to brainstorm on ways to do this. Following are some snippets from the press.

The Sheboygan Rifle & Pistol Club, an organization affiliated with the CMP recently moved its shooting range out of a Wisconsin middle school after parents raised concerns about exposing students to lead.  The club had an October, 2011 deadline to either upgrade the range's ventilation system or move out. Parents raised concerns about how the children were being protected from the range's lead residue. http://www.nbc26.com/news/local/130574288.html

In 2002, Youth shooting programs at the Tanana Valley  (AK) Sportsmen's Association, an organization affiliated with the CMP, shooting range have been halted after 10 members of the Lathrop High School rifle team were found to have high concentrations of lead in their blood.

"The U.S. Center for Disease Control recognizes blood lead levels (BLLs) of >25 µg/dL in adults and >10 µg/dL in children aged <6 years as levels of concern; no similar level has been set for older children and adolescents (1,2). During 2002--2004, the Alaska Environmental Public Health Program (EPHP) conducted lead-exposure assessments of school-based indoor shooting teams in the state, after a BLL of 44 µg/dL was reported in a man aged 62 years who coached a high school shooting team in central Alaska. This report summarizes the results of the EPHP investigation of potential lead exposure in 66 members of shooting teams, aged 7--19 years, who used five indoor firing ranges. The findings suggest that improper design, operation, and maintenance of ranges were the likely cause of elevated BLLs among team members at four of the five firing ranges. Public health officials should identify indoor firing ranges that have not implemented lead-safety measures and offer consultation to reduce the risk for lead exposure among shooters, coaches, and employees."

Although outdoor firing ranges put more lead into the environment than nearly any other major industrial sector in the United States, they remain almost entirely unregulated. In just two years a typical outdoor firing range can have lead contamination equivalent to a five-acre Superfund site.

A National Call: Save Civilian Education

The most aggressive outside effort to use the school system to teach an ideology with ominous long-term implications for society comes from the military establishment. Over the last two decades, with relatively little media coverage or public outcry, the Pentagon’s involvement in schools and students’ lives has grown exponentially. 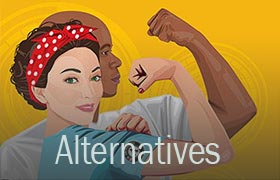