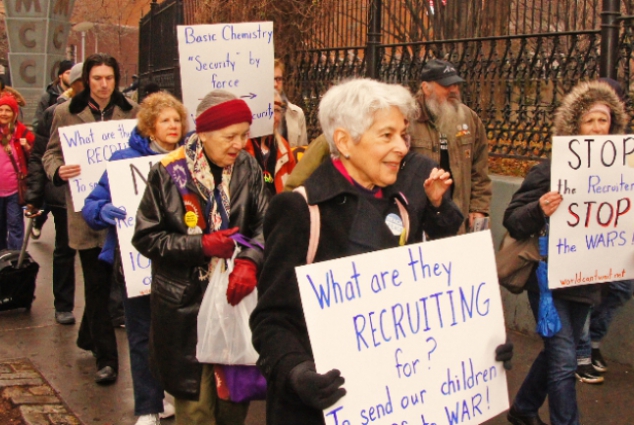 During the Second Battle of Fallujah in November 2004, 1st Lt. Jesse A. Grapes saved the lives of three wounded marines in his platoon by entering a burning house, where he encountered the enemy soldier who had been firing at his troops. Six years later Grapes was named headmaster of Benedictine College Preparatory, a Catholic military school in Richmond, Virginia. The June 2010 issue of the school’s newspaper, The New Chevron, called Grapes a “patriotic war hero.”

It’s quite a lesson for students at Benedictine, which is kind of a poster child for the modern militarized Catholic school. Every year Benedictine requires all juniors to take the military entrance exam. The school operates an Army JROTC program and has a student organization that teaches students how to use small arms. Of course, these are expected activities in a military school. The question is whether these activities are appropriate in a Catholic school.

Military recruiters typically don’t frequent high schools such as Benedictine because the school does their work for them, in this case, by providing the military with young men who become officers. Many Benedictine Cadets pursue their college education at service academies or schools such as Virginia Military Institute or The Citadel in South Carolina. A surprising number of Catholic schools nationwide have opened their doors to military recruiters and—whether they realize it or not—share private information about students that makes them vulnerable to recruiting efforts.

Recruiting is an insidious psychological game. The United States Military Entrance Processing Command (USMEPCOM) collects data from hundreds of sources and develops a highly sophisticated virtual, psychological portrait of each student before first contact. The Department of Defense operates a database for recruiters called the Joint Advertising Market, Research & Studies (JAMRS), which according to the DOD website explores “the perceptions, beliefs, and attitudes of American youth as they relate to joining the military.”

The database contains personal information about millions of Americans ages 16 to 25. The military collects information that individuals voluntarily contribute on recruitment brochures or questionnaires and buys information from the Department of Motor Vehicles, the Selective Service System, the College Board, and the Armed Services Vocational Aptitude Battery (ASVAB) test. It is even allowed to request directory information for recruitment purposes under the No Child Left Behind Act.

A November 2007 article in the Recruiter Journal detailed the Army Custom Segmentation System, a data system that helps recruiters target local populations and even individuals. Military recruiting services know what’s in Johnny’s head and what his goals are. They know Johnny plays Call of Duty on his Xbox 360, weighs 150, and drives a 15-year-old Toyota Camry.

American Catholic schools are the most military-friendly Catholic schools in the world. Nowhere is the cultural divide between the American church and the Vatican more apparent. In 2001, the Vatican ratified the United Nations Optional Protocol to the Convention on the Rights of the Child on the Involvement of Children in Armed Conflict. The treaty requires that recruitment practices involving minors must be voluntary and carried out with the informed consent of the child’s parents or legal guardian. It doesn’t appear that many of America’s Catholic high schools are upholding the Vatican’s end of the deal.

According to its handbook, the U.S. Army School Recruiting Program’s objective is to “assist recruiters with programs and services so they can effectively penetrate the school market. The goal is school ownership that can only lead to a greater number of Army enlistments.” This kind of ownership is apparent at Greensburg Central Catholic Junior-Senior High School in Greensburg, Pennsylvania, where the USMEPCOM presents awards to recruiters.

Some Catholic high schools across the country encourage regular visits by military recruiters and sponsor military programs that entice youth to enlist, often without full disclosure of the true intent of the programs. A simple Google search uncovers dozens of these programs in Catholic schools, openly advertised on each school’s website.

Sometimes they orchestrate low-altitude flyovers during homecoming football games. They have monthly quotas that are getting tougher to meet as the economy improves.

Some of these activities may seem rather innocuous on their own, but taken together they amount to an unprecedented invasion by the military in Catholic schools. I’ve taken enough calls through a G.I. help line to become familiar with the tearful 20-year-old marine who has killed and can’t reconcile it, and now wishes he had never joined. Often the young marine says a school recruiter was primarily responsible for convincing him to enlist.

Catholic schools have done a poor job compared to many of their public school counterparts in protecting children from the military’s predatory practices. Pius X High School in Lincoln, Nebraska, for instance, required students to take the military’s ASVAB entrance exam without providing parental consent to release student information. Although military regulations clearly identify the testing as a recruiting device, few Catholic schools notify parents about the true nature of the program.

Catholic schools are a notoriously independent bunch, unlike state and local schools that operate under boards that regulate hundreds of institutions. For instance, Maryland requires parents to complete a form that asks if they want to remove their child’s name from lists being sent to recruiters. Catholic schools have no supra-school authority like this, and the military prefers it this way.

Jesus calls us to love our enemies, but the Army preaches something much different. Catholic school youth enlist in a military that requires the subordination of Catholic doctrine to military command. For many, the vestiges of 12 years of Catholic education are erased in a few weeks of basic training.

Our high school children who enlist take an oath that requires obedience to Army regulations, including the Army Field Manual, which states, “Your personal values may and probably do extend beyond the Army values, to include such things as political, cultural, or religious beliefs. However, if you’re to be an Army leader and a person of integrity, these values must reinforce, not contradict, Army values.”

Jesus said no one can serve two masters. USMEPCOM stands poised to exploit the dichotomy. For example, the 3rd Recruiting Brigade in Fort Knox, Kentucky encourages Catholic recruiters to request permission from school officials to attend Mass in their military uniform. The school, they say, will probably be honored to have them attend.

I am conscientiously opposed to participation in war—a prevailing position in the early centuries of the church that has been replaced by the more lenient just war doctrine. Pope Francis has challenged the church’s 1,700-year-old green light for war by stating, “Brothers and sisters, never war, never war! Everything is lost with war, nothing is lost with peace.”

Now consider the rebellious, obstinate, contrarian 17-year-old who is not getting along with his parents, who are frightened by his stated intentions to join the military. Consider the recruiting command that gathers a virtual portrait of the youth for its targeted, sophisticated pitch. Consider the Catholic school that allows recruiters to casually spend time with students in the cafeteria during lunch. What are we thinking?

Our Catholic schools must cease to promote the presence of recruiters on campus that foster relationships between these wolves and our sheep. We should protect our children from military recruiters and raise them, instead, to aspire to a lifetime of Christian witness and service.

And the survey says...
1. Military recruiters have no place in Catholic high schools.


2. Parents should be able to opt out of having their kids exposed to military recruiting.


3. I think serving in the military goes against Catholic teaching.


4. The military teaches many values that align with the mission of Catholic education.


5. High school students should have a choice about whether their school shares personal information with recruiters.


6. High school students are young and too vulnerable to be exposed to military recruiting campaigns.


7. A JROTC curriculum has no place in a Catholic school.


9. The presence of military recruiters could discourage high school students from considering other Catholic responses to war, such as pacifism and conscientious objection.


10. ?Acceptable ways for Catholic high schools to work with military recruiters include:


Giving the recruiters access to students through campus events and activities.

Results are based on survey responses from 219 USCatholic.org visitors.