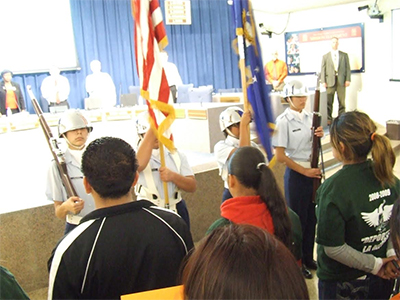 One way that concerned citizens can successfully address the issue of gun violence is to work locally for the removal of marksmanship programs and shooting ranges from high schools.

Such programs introduce gun culture into a school environment where zero-tolerance for weapons of any kind is supposed to be the standard policy. Over 2,000 high schools make an exception to zero-tolerance by allowing marksmanship training. It sends a mixed message to their students and puts them at risk for the potential promotion of school violence, as we saw in the February 2018 school shooting at Stoneman Douglas High School in Florida.

To address this issue, the National Network Opposing the Militarization of Youth (NNOMY), in collaboration with Project on Youth and Non-Military Opportunities - Project YANO, has developed a new resource called, Guide to Removing Marksmanship Training from High Schools.
This guide documents the process and strategies learned by the Education Not Arms Coalition. Comprised of students, teachers, and parents, the coalition successfully lobbied for the removal of marksmanship training and shooting ranges from eleven high schools in the very militarized city of San Diego, California.

2/10/09 Board of Education debate and approval of marksmanship training ban.

NNOMY recommends this proven strategy for organizing a campaign for the removal of marksmanship training on a school district level thus accomplishing an important aspect of school demilitarization.

Here are some of the accomplishments of the Education Not Arms Coalition strategy: 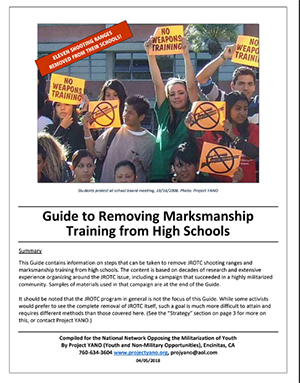 Don't Accept the Militarization of Your School! Activate for Peaceful Learning Choices.