Do military recruiters disproportionately target communities of color and the poor? 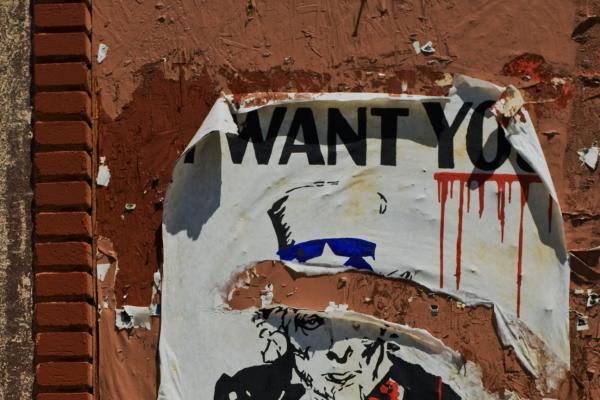 Recently I stumbled upon an online exchange about why young people join the military. One participant who claimed to be "on the Left" made the following assertion: "Disenfranchisement is the reason why kids join the military and they know going in that it gives them the opportunity to legally and with the blessing of our government kill, torture, and hate other people in order to give an outlet to their hostilities toward society."

Among the many youth I have met over the years as an educator and counter-recruitment activist, I have never met anyone who enlisted so that he or she could "kill, torture, and hate." While "disenfranchisement" may be an accurate word for why some youth enlist, the claim that working-class youth sign up so that they can "legally kill and torture other people" at the very least betrays a profound misunderstanding of why young people join the "all-volunteer military" and at worst reveals biases that separate Americans due to differences of class and race.

On the opposite end of the political spectrum, the conservative claim that most youth enlist due to patriotism and the desire to "serve one's country" is equally misleading. The Pentagon's own surveys show that something vague and abstract called "duty to country" motivates only a portion of enlistees. But the vast majority of young people wind up in the military for different reasons, ranging from economic pressure to the desire to escape a dead-end situation at home to the promise of citizenship.

WHEN MANDATORY MILITARY service ended in 1973, the volunteer military was born. By the early 1980s, the term "poverty draft" had gained currency to connote the belief that the enlisted ranks of the military were made up of young people with limited economic opportunities.

Today, military recruiters react angrily to the term "poverty draft." They parse terms in order to argue that "the poor" are not good recruiting material because they lack the necessary education. Any inference that those currently serving do so because they have few other options is met with a sharp rebuke, as Sen. John Kerry learned last November when he seemed to tell a group of college students they could either work hard in school or "get stuck in Iraq."

President Bush led the bipartisan charge against Kerry: "The men and women who serve in our all-volunteer armed forces are plenty smart and are serving because they are patriots—and Sen. Kerry owes them an apology."

In reality, Kerry's "botched joke"—Kerry said he was talking about President Bush and not the troops—contained a kernel of truth. It is not so much that one either studies hard or winds up in Iraq but rather that many U.S. troops enlist because access to higher education is closed off to them. Although they may be "plenty smart," financial hardship drives many to view the military's promise of money for college as their only hope to study beyond high school.

Recruiters may not explicitly target "the poor," but there is mounting evidence that they target those whose career options are severely limited. According to a 2007 Associated Press analysis, "nearly three-fourths of [U.S. troops] killed in Iraq came from towns where the per capita income was below the national average. More than half came from towns where the percentage of people living in poverty topped the national average."

It perhaps should come as no surprise that the Army GED Plus Enlistment Program, in which applicants without high school diplomas are allowed to enlist while they complete a high school equivalency certificate, is focused on inner-city areas.

When working-class youth make it to their local community college, they often encounter military recruiters working hard to discourage them. "You're not going anywhere here," recruiters say. "This place is a dead end. I can offer you more." Pentagon-sponsored studies—such as the RAND Corporation's "Recruiting Youth in the College Market: Current Practices and Future Policy Options"—speak openly about college as the recruiter's number one competitor for the youth market.

Add in race as a supplemental factor for how class determines the propensity to enlist and you begin to understand why communities of color believe military recruiters disproportionately target their children. Recruiters swear they don't target by race. But the millions of Pentagon dollars spent on special recruiting campaigns for Latino and African-American youth contradicts their claim.

According to an Army Web site, the goal of the "Hispanic H2 Tour" was to "Build confidence, trust, and preference of the Army within the Hispanic community." The "Takin' it to the Streets Tour" was designed to accelerate recruitment in the African-American community where recruiters are particularly hard-pressed and faced with declining interest in the military as a career. In short, the nexus between class, race, and the "volunteer armed forces" is an unavoidable fact.

NOT ALL RECRUITS, of course, are driven by financial need. In working- class communities of every color, there are often long-standing traditions of military service and links between service and privileged forms of masculinity. For communities often marked as "foreign," such as Latinos and Asians, there is pressure to serve in order to prove that one is "American." For recent immigrants, there is the lure of gaining legal resident status or citizenship.

Economic pressure, however, is an undeniable motivation—yet to assert that fact in public often leads to confrontations with conservatives who ask, "How dare you question our troops' patriotism?" But any simplistic understanding of "patriotism" does not begin to capture the myriad of subjective motivations that often coexist alongside economic motives. Altruism—or as youth often put it, "I want to make a difference"—is also a major reason a significant number of people enlist.

It is a terrible irony that contemporary American society provides working-class youth with few other outlets besides the military for their desire for agency, personal empowerment, and social commitment. It is especially tragic whenever U.S. foreign policy turns away from national defense and back toward the imperial tradition of military adventurism, as it did in Vietnam and Iraq. Within a worldview of pre-emptive war and wars of choice, the altruism and good intentions of young people become one more sentiment to be manipulated and exploited in order to further the aims of a small group of policymakers.

In this scenario, the desire to "make a difference," once inserted into the military apparatus, means young Americans may have to kill innocent people or become brutalized by the realities of combat. Take the tragic example of Sgt. Paul Cortez, who graduated in 2000 from Central High School in the working-class town of Barstow, Calif., joined the Army, and was sent to Iraq. On March 12, 2006, he participated in the gang rape of a 14-year-old Iraqi girl and the murder of her and her entire family.

When asked about Cortez, a classmate said: "He would never do something like that. He would never hurt a female. He would never hit one or even raise his hand to one. Fighting for his country is one thing, but not when it comes to raping and murdering. That's not him." Let us accept the claim that "that's not him." Nevertheless, because of a series of unspeakable and unpardonable events within the context of an illegal and immoral war, "that" is what he became. On February 21, 2007, Cortez pled guilty to the rape and four counts of felony murder. He was convicted a few days later, sentenced to life in prison and a lifetime in his own personal hell.

As ex-Marine Martin Smith wrote recently in Counterpunch: "It speaks volumes that in order for young working-class men and women to gain self-confidence or self-worth, they seek to join an institution that trains them how to destroy, maim, and kill. The desire to become a Marine—as a journey to one's manhood or as a path to self-improvement—is a stinging indictment of the pathology of our class-ridden world." Like a large mammal insensitive to its offspring's needs and whereabouts, America is rolling over on the aspirations of its children and crushing them in the process.

Let us return now to our "friend" who thinks young people enlist so that they can legally kill and torture other human beings. According to this theory, Sgt. Cortez was a rapist before he enlisted. And so are others who enlist.

If young people enlist because of a predisposition to "kill and torture," why do so many U.S. troops crack under the pressure of combat and its aftershocks? Why are at least one in eight of all Iraq veterans suffering from post-traumatic stress, according to a 2004 Pentagon study published in the New England Journal of Medicine? Dr. Matthew J. Friedman, executive director of the Department of Veterans Affairs' National Center for Post-Traumatic Stress Disorder, stated that the study's results were far too conservative. As the war in Iraq drags on, many more young veterans will experience some debilitating form of PTSD.

And if the majority of soldiers and Marines enjoy killing, why have so many filed for conscientious objector (CO) status? Hundreds of troops serving in Iraq and Afghanistan have either begun or completed the CO process. According to Bill Galvin of the Center on Conscience and War: "For some people, the training gets to them. From stabbing dummies, to shouting 'Kill!' or 'Blood makes the grass grow!' But in the last year or two, we've been hearing people talking about their experiences in the war, or talking about the children they've witnessed being killed, or the civilians that were murdered. Some of them are wrestling with the guilt about people they may have killed or families they may have ruined."

Most people are not predisposed to kill, and so it should concern us that our children are being increasingly militarized in their schools and the culture as a whole. To take only one example: What does it mean for a society to put young people from ages 8 to 18 in military uniforms and call it "leadership training"? This is precisely what each of the more than 300 units of the Young Marines program is doing at a neighborhood school near you.

From rural America to the urban cores of deindustrialized cities, a military caste system is slowly taking shape. If recent history is any indication, our politicians will use our military less for national defense than for adventures premised on control of resources, strategic advantage, and ideological fantasies. As in the final decades of every declining empire, it's likely that many wars loom in our future.

Exactly who will have to fight and die in those wars will be determined by economic class. In order to accomplish their goals, the recruiters and politicians will exploit the hopes and dreams of mostly well-intentioned youth from humble origins who are looking for a way to contribute to a society that has lost its moral compass. As they did in Vietnam and again in Iraq, young women and men will serve their country. But how well will their country have served them?

Jorge Mariscal is the grandson of Mexican immigrants and the son of a U.S. Marine who fought in World War II. He served in the U.S. Army in Vietnam and currently teaches at the University of California, San Diego.