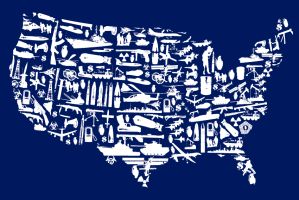 It used to be understood in this country that the key to securing and protecting our democratic rights was to exercise strict control over the military. One of the prerequisites for this control has always been maintaining a strong, protective buffer between civilian society and the armed forces. Clearly, this buffer has been eroded over the years, and now very few components of our society-especially government and the economy-have escaped the powerful influence of militarism.

One key institution that is currently under intense attack from the military is public education. This assault is not being accomplished using tanks and helicopter gun ships-though bringing them to campuses is, in fact, one of the Pentagon's goals-but rather by using the weapons of economic coercion and legal threats. It reflects a developing trend that could have broad, long-lasting implications for social change work but, unfortunately, has received relatively little attention from even some peace organizations that have traditionally concerned themselves with such issues (see resource listing on page seven for some of the exceptions).

The Erosion of Educational Autonomy

Ten years ago, colleges and universities were able to set their own policies on accepting ROTC units or granting armed forces recruiters access to campus facilities and students, and a number of schools exercised their right to restrict or prohibit the military's campus presence. Also, in most states college students who resisted draft registration by not signing up with the Selective Service System could still apply for and obtain state and locally funded financial aid (federal student aid has been unavailable to them since 1983).

In the last few years, this ability of educational institutions to assert their independence from the military has been severely curtailed. Former-Representative Gerald Solomon, a conservative Republican from New York who recently left Congress, led the attack by introducing federal legislation which compels schools to cooperate with Selective Service and punishes campuses when they refuse to cooperate with ROTC and military recruiters. Proposals modeled after his legislation have also been introduced and passed in some states, including laws which make draft registration resisters ineligible for state civil service jobs, state student aid and, in some cases, admission to state colleges and universities.
From a practical standpoint, the state laws are an act of overkill, since the threatened loss of just the federal funds is already enough to force the vast majority of students and schools to comply. The true significance of the state laws is to establish a higher status for the military on a local level by conveying to young people that deference must be paid to the armed forces, and failure to concede this point will result in punishment-in this case, additional economic hardship for schools and students.

As a result of Solomon's most recent efforts, post-secondary schools now stand to lose substantial funds if they try to restrict the military's campus presence. Under provisions of the National Defense Authorization Act of 1995, National Defense Authorization Act for 1996, and the Omnibus Consolidated Appropriations Act of 1997, schools can lose funds-including some funds used for student aid-from the departments of Defense, Transportation, Labor, Health and Human ~ Services, Education, and Related l Agencies. This loss of federal support can be triggered by any school policy or practice (regardless of implementation date) which either prohibits, or in effect, prevents, military recruitment representatives from obtaining entry to campuses, access to students on campuses or access to directory information on students, or which prevents the establishment and effective operation of a senior ROTC unit. Campuses with a "long-standing policy of pacifism based on historical religious affiliation" are still allowed to exclude military recruiters, if they wish, but the number of qualifying institutions is very small.

This change in law came about, in part, because a growing number of schools had adopted campus policies against discrimination based on sexual orientation. In line with these policies, campuses asserted their right to refuse to allow homophobic organizations access to school facilities; and since the Pentagon is the largest employer that fires people solely for being lesbian, gay or bi-sexual, many of the schools decided to ban armed forces recruiters and military programs like ROTC.

After the passage of Solomon's legislation, these schools faced the loss of significant, irreplaceable funds. Most, if not all, succumbed to the economic coercion and have been forced to accept violations of their nondiscrimination policies: ROTC cannot be banned, recruiters must be guaranteed access to the physical campus, and recruiters must be able to obtain directories of students names, addresses and phone numbers. (A few narrow exceptions are allowed, but they generally will not significantly limit the military's access to campuses and students.)

Given the success of legislation forcing post-secondary schools to accept military training programs and recruiters, and the growing willingness of state legislators to pass parallel laws, it should not be surprising that the Pentagon and its supporters are now aiming their sights at grade schools. In March, military recruiters testifying before a House Armed Services Committee military personnel subcommittee complained that their efforts are being hampered by parents and teachers who view the armed forces as a "last option" for students who can't get into college or find good jobs. One recruiter said, "We have parents out there that forget what made America America. We have a lot of walls to break down."

One of the walls they want to break down is the right of citizens to protect their schools and homes from unwanted intrusions by the military. Air Force Sgt. Robert Austin, an Oklahoma City recruiter, complained that high schools will often give lists of students names to college representatives but not the armed forces. And he noted that individual school districts and principals can decide whether recruiters can go on campus. "I think that if they're federally funded, they shouldn't be able to tell us we can't come into the schools," said Austin.

At the time of the testimony, no members of the House Armed Services Committee subcommittee indicated whether they would introduce a law mandating military access to high schools, but the ranking Democrat, Rep. Neil Abercrombie of Hawaii, said, "l think that's a good idea."In fact, such a law was once introduced unsuccessfully by Solomon, and there have been similar attempts at the state level. When several California school districts banned recruiter access to student lists during the Persian Gulf War, a reactionary bill almost made it through the legislature which would have mandated military access to high school campuses and student directory information. At the last minute, it was amended to become only a statement of legislative intent without the force of law. At least one state, Ohio, succeeded in passing a law which prevents high schools from limiting recruiter access to student addresses.

Even without a federal law mandating high school access, the Pentagon has significantly expanded its presence in schools. More recruiters are now invading both secondary and lower grade schools, where they give youths the false impression that the military is their best hope for obtaining the training and college financial aid that will later give them a chance at economic security. The view students have of viable civilian alternatives is being obliterated by the overwhelming marketing resources being employed by the armed forces. In many cases recruiters are being received with open arms by school counselors and vocational advisors who feel unable to deal with the problems facing today's young people problems which, ironically, are exacerbated by the huge diversion of national resources to the military.

Another recruiting device, the Junior Reserve Officers' Corps program, actually puts the Pentagon in a position to directly rob schools of local educational funds. The military tricks a growing number of school officials into accepting this curriculum by leading them to believe that JROTC is a cost-effective way to offer students a beneficial elective. The federal government shares in the cost of JROTC, but in actuality, schools wind up paying more than they would for a regular academic class, and they are essentially subsidizing military training and indoctrination.

Grassroots opposition to the military's invasion of public education has produced some important victories by community and student organizations. Court rulings have upheld the right of counter-recruitment activists to have equal access to schools, JROTC has been defeated in a few communities, and some educational institutions have been persuaded to adopt policies which limit or restrict armed forces activities on campuses. However, some of these victories-especially at the college level- have recently been reversed by the new legislation, and others are being threatened with talk about making military access mandatory at high schools.

The military establishment understands the key role that schools play in the shaping of people's values and attitudes, and they know that the deeper they penetrate into education, the greater their influence will be on society as a whole. Their goal is not just to attract enlistees; it is also to strengthen the position of the armed forces, in general, by teaching military values to a larger segment of the population and affecting people's worldview. If allowed to continue, the result will be a more conservative political climate and, in the long term, a breakdown in the protective barriers that prevent further military encroachment on civilian rule.

All of this underscores the importance of grassroots efforts to challenge the economic coercion and other legislative attempts to impose military recruiters and programs like JROTC and ROTC on our schools. Organizing against military intrusion is a way to resist a trend which, if allowed to continue unchecked, will affect a wide range of issues in future years. When it comes to subjects like economic justice, health care, women's reproductive rights, racial equality, the environment and other concerns of progressives, social change activists will have much more difficulty organizing when more young people have been persuaded that (in the words of one JROTC textbook) "the same qualities that make a good leader in the military services are equally helpful to the civilian leader," and being a good citizen means loyalty and obedience to leaders, "whether or not you agree with them." Militarism instills a conservative attitude toward life that children then carry into the community.

It is crucial that more social change activists realize the stake we all share in this issue. If we are to stop the trend toward greater militarization of society-and, by implication, the drift toward greater conservatism-more groups and individuals will need to join the effort to resist the military's encroachment on our civilian educational system. It's an immediate problem that we cannot afford to ignore if we hope to advance the cause of progressive social change in the future.

Rick Jahnkow is active in the Committee Opposed to Militarism and the Draft and the Project on Youth and Non-Military Opportunities (Project YANO), both of which are based in San Diego, California and have received grants from Resist. For information, contact Project YANO, PO Box 230157. Encinitas. CA 92023.