No Child Left Behind Act - Overview 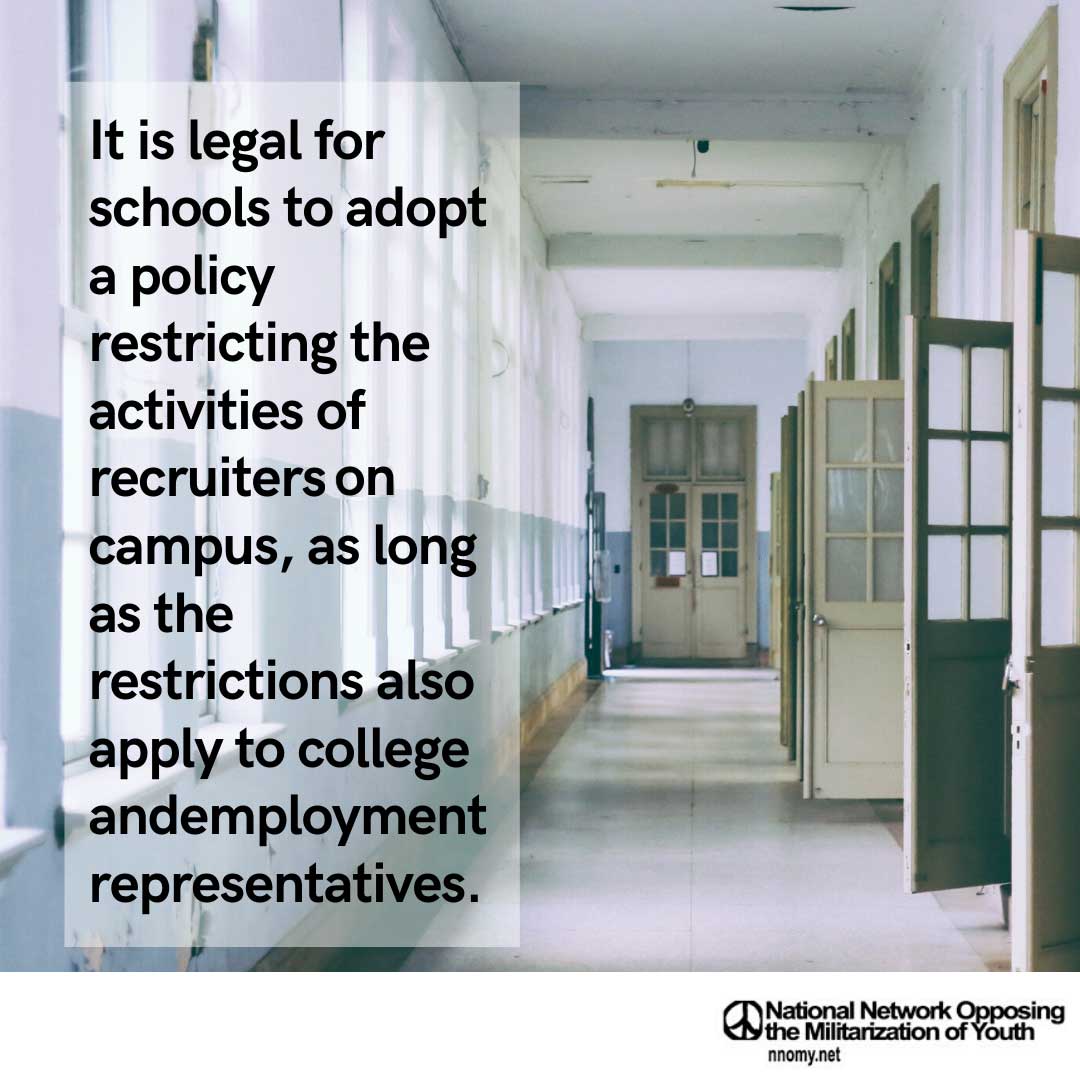 The No Child Left Behind Act, signed into law by President George Bush on January 8, 2002, is touted by many as a federal bipartisan success story designed to impact the way children learn in school and how schools and states are held accountable to students, parents and educational communities. It is an elaborate reauthorization of the Elementary and Secondary Education Act of 1965 that, among other things, initially offered grants to low income school areas and established the federal lunch and milk programs. In spite of the new act’s overwhelming support by Washington legislators and policy makers, it is starting to come under fire for a well-hidden section entitled Sec. 9528. Armed Forces Recruiter Access to Students and Student Recruiting Information.

The section grants military recruiters access to students' private information. With this access, recruiters can make unsolicited calls and send direct-mail recruitment literature to a young person’s home. Parents, students, public education activists and those working to demilitarize the nation’s schools are beginning to see the legislated “open door” policy for military recruiters as a clear violation of the Privacy Act of 1974. They are studying the law and the options available to counter its influence.

The act’s coercive language forces schools and institutions receiving assistance under the act to comply with its directive. Non-compliance means that schools could face the relinquishment of federal funding.

Advocates of the act and Section 9528 point to the “opt-out” clause written into the act which, if implemented, gives parents and students the opportunity to request that their information not be released without parental signatures. They consider this opt-out clause ample enough to accommodate those who consider the act a violation of privacy laws.

The clause states, “(2) CONSENT – A secondary school student or the parent of the student may request that the student’s name, address, and telephone listing described in paragraph (1) not be released without prior written parental consent, and the local educational agency or private school shall notify parents of the option to make a request and shall comply with any request.”

This clause, however, is controversial due to its vagueness about how an educational institution must inform parents and students of the option. School districts around the country are not using a uniform system to let parents know about the act. As a result many parents may never find out that their information is being handed over to the military.

Legal experts scrutinizing the act believe that the consent clause may not be a true “opt-out” since it says a parent or student can request that information “not be released without prior written parental consent…” This could imply that a school must simply procure a parent’s signature before releasing information. The statute does not indicate that the parent or student has a right to refuse to share their information with the military. Critics are troubled by this. Activists from all interpretive stances are also advocating for a clearer “opt-in” measure that parents and students can implement. Allowing parents or students to write a request indicating that they want their information to be released to the military could prevent violations of both state and federal privacy provisions and still have schools be in compliance with the law.

The act links military recruiting with the type of access recruiters from institutions of higher education are generally given. Equating military training as comparable to a college or university education is disingenuous and presents a problem for parents or students wishing for their information to not to be released under the assumed “opt-out” clause. The variety of ways school districts across the country are informing students and parents of their option makes it possible for a young person to inadvertently have their information not released to institutions of higher education. This could happen if a school sends home a form to be returned with a signature that doesn’t allow for selective opting out.

The statute directs schools to afford the military the same access it offers to post-secondary educational institutions or prospective employers implying erroneously that schools have policies to illegally supply employers and colleges with private student information. Career fairs and college fairs are traditional ways for employers and colleges to reach out to potential applicants and should be the only access option for recruiters of a discriminatory employer such as the military. Many military recruiters, aware of the repercussions of non-compliance with the act, use the statute to enter high schools unannounced and roam the halls trying to drum up business. The threat of being labeled unpatriotic or of potentially losing federal funds is enough to make some schools look the other way and allow the military recruiter more access than college and civilian employment recruiters are allowed.
What can you do to resist the military incursion into public and private schools?

Distribute opt out forms to students, parents and educators.

Download an Adobe Acrobat PDF flyer prepared by The Committee Opposing the Militarism and the Draft which details what you can do, or read the flyer in HTML format on the website.

Read about how to work to reduce recruiter access in schools .
About the Author

Oskar Castro is a staff person for the National Youth and Militarism Program. You can reach him at: This email address is being protected from spambots. You need JavaScript enabled to view it. .
Source

US Department of Education