Are American Evangelicals Seduced by Militarism? 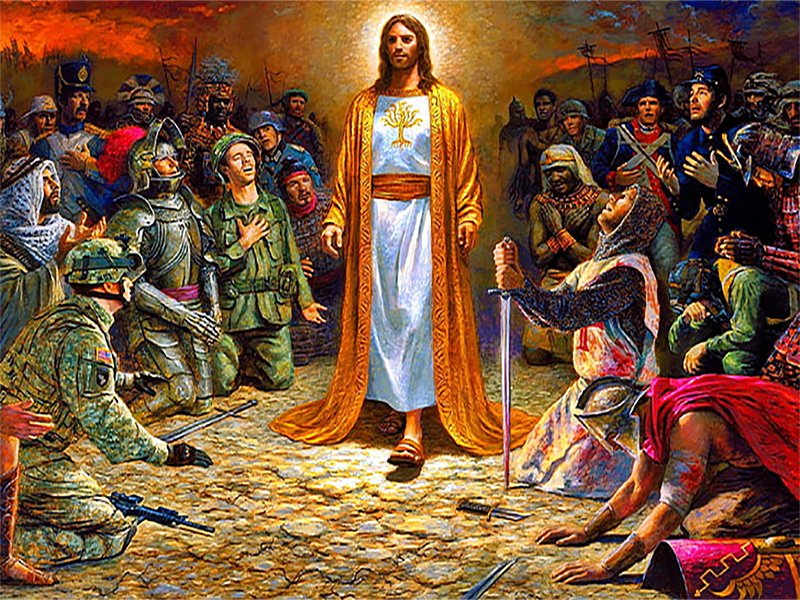 American militarism. The very phrase evokes a cacophony of responses from the public, not least from the American Evangelical church. It’s undeniable that America is becoming more and more militarized, as several recent books have pointed out (e.g. Andrew Bacevich, The New American Militarism; Rachel Maddow, Drift). Some Evangelicals are quick to celebrate America’s military prowess—the bigger the better—while others see it as dangerous, if not idolatrous. For reasons state in this post and the next, I believe the latter: the American Evangelical church is largely (not completely) seduced by military might.

But what is “Militarism?” According to the New Oxford American Dictionary, “Militarism” is:

[T]he belief or desire of a government or people that a country should maintain a strong military capability and be prepared to use it aggressively to defend or promote national interests.

By “militarism,” therefore, I do not mean “the people participating in the military” (I myself come from a long line of Marines), but the overarching “belief or desire” of having a strong military to protect or advance national or religious interests. Not every member of the military, as several of my military friends have told me, actually buy into the overarching agenda of militarism.

Now, I would argue—and it’s hard to argue otherwise—that America is becoming more and more militarized. I would also argue (though no time in this blog to prove it) that America’s recent militarism is an aberration of its original ideals. For much of its history, America has been critical of militarism, seeing it actually as a threat of its own liberty (as thoroughly documented in Bacevich’s book). But such an argument is neither here nor there in terms of a biblical worldview. The nations will do what the nations will do. But the recent push for militarism is augmented by one significant—and quite bewildering—fact: the American Evangelical church has been leading the charge for the nation’s recent fascination and faith in military might.

Throughout the 20th century, American Christians have shown a varied reaction toward military might. But beginning in 1980 (and to some extent in the mid-late 70’s), there has been an unchecked attraction to (and faith in) American militarism as an extension of religious freedom. The Vietnam debacle stunted America’s faith in militarism, and the Carter administration (1977-1981) did nothing to reverse the tide. But with the Reagan years (1981-1989), there arose—among Evangelical Christians, in particular—a growing sense that America’s military and (Christian) religious freedom when hand in hand. During the 80’s atheistic communism posed a catastrophic threat toward America’s freedom, and Evangelicals turned to America’s military as the solution to the problem. During the 80’s there was an overwhelming support among U.S. Evangelicals of the U.S. military, precisely because the military was the answer to stave off the threat of atheistic communism. Therefore, Reagan’s unyielding promotion of militarism garnered many friends from the Evangelical church.

Tim LaHaye, for instance, located the moral degradation of America in the “crisis of military weakness” and he believed that “the Bible supports building a powerful military force. The Bible,” argues Lindsay, “is telling the U.S. to become strong again” and “to use our vast and superior technology to create the world’s strongest military power” (The 1980s: Countdown to ArmageddonThe 1980s: Countdown to Armageddon). Lindsay’s sentiment was shared by many Evangelicals in his tradition. Jerry Fallwell called America back to biblical values, which included patriotism and a strong military to ward off the threat of atheistic communism (see his Listen America!). Military general and fellow Evangelical, William Boykin said that “Satan wants to destroy this nation… and he wants to destroy us as a Christian army.” He therefore saw America’s military as an extension of God’s fight against evil. Other Christian conservatives, such as G. Russell Evans and C. Greg Singer, argued that only liberals promoted “pacifism, disarmament [of the U.S. military], and abortion on demand.” Wayne Grudem sees America’s “superior military weaponry” as “a good thing for the world.” After all, “[g]enuine peace in the world comes through the strength of the United States” (Grudem, Politics, pp. 399-400)—C.I.A. drone strikes notwithstanding.

In short, during the 80’s and 90’s (and even today), any protest against war within the Christian church constituted apostasy toward liberalism (see Bacevich, The New Militarism, 122-146). To be Evangelical was synonymous with being pro-military, anti-abortion, pro-family, pro-defense, and pro-republican. It was the republican Reagan and not the democrat Carter who cared to stand against atheistic communism—guns a blazin. All protesting voices were declared liberal and swept under the rug of American Evangelical rhetoric—despite what the Bible says about military might.

So what does the Bible say about militarism? The next post will show that regardless of the growing opinion of American Evangelicals in the last few decades, God does not think too highly of military might. In fact, He condemns it as idolatry.

Poverty, Militarism and the Public Schools