Researching Pop Culture and Militarism: If we oppose militarism and militarization, what should our relationship with pop culture be? 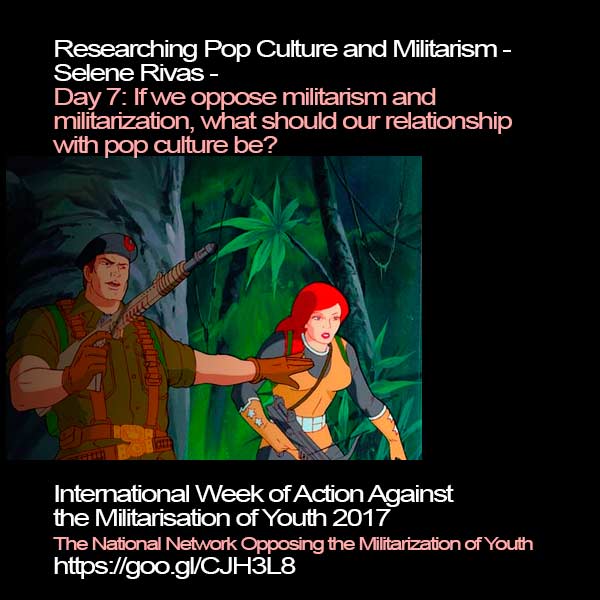 Over the course of this series, we have explored several concepts which are building blocks for the social sciences (“normal”, “normalization”), which in turn have helped us understand and define “militarism” and “militarization”. After this, we dove into the transformative potential found within popular culture: how can it affect the people who consume it? Linking this very powerful influence to previously defined concepts was both the justification and launching point for the two articles that followed. In them, we tried to build upon what had been said previously, and provide some examples of what could be accomplished through this approach.

All forms of art and media are political, that is to say, they contain and work off of a series of assumptions about the world, whether intended or not by the creator. That is because all media and art originates in the mind of a person, which is in turn shaped by their worldview; we all have opinions and make assumptions, consider certain things normal or not. Like it or not, these influence our creations, makes them products of our time and place. Even in academic or scientific discourse, such as the one attempted by this series, the “I” is relegated to mouthing silently as the impersonal language of authority imposes itself. Being aware that there is no such thing as objectivity or non-political discourse is the first step towards having a critical mind.

Passivity, that is, uncritical consumption of media, is complicity. If we choose to not question the messages, hidden or obvious, in what we consume, or the motives and interests which knowingly or otherwise construct them, then we are letting others define our world. Fact or opinion, human nature or fancy, what is or isn’t possible, normal or abnormal, all of these are socially constructed. The first step towards active participation in defining better terms and, consequently, better worlds, is by being critical of the terms and worlds others have long defined for us. It is waking up and realizing the subtext that is present in everything, whether intentionally or otherwise. Even if we end up choosing to continue consuming the same as before, at least it was a choice.

This series has hoped to lay some groundwork for exploring these questions. As peace activists or just people who oppose the war, we must begin our effort by asking ourselves about ourselves: what are some assumptions under which I operate that others have established for their benefit? Activism and concern are not just reserved for the streets or schools, but begins within ourselves, as an “ironing out” of contradictory behavior. These contradictions do not lie in watching violent or militarized media, but instead in being so critical of the explicit militarization efforts of certain governments, and yet uncritical when it comes to the personal and immediate.

The question we must keep asking ourselves, which we must continue to struggle with, is what place do these media preferences have within our own internal value systems? Can we reconcile the fact we’re supporting, whether with our money or our attention, certain organizations and ideas that support that which we’re struggling against? Instead of advocating against certain types of media, this is a plea for you to answer these questions truthfully for yourself; if popular culture is a space of significations, of meanings we construct that go beyond the intended meaning of the creators, then as part of our own peace efforts we must re-signify for ourselves and inside the peace community the media that has been co-opted for war.