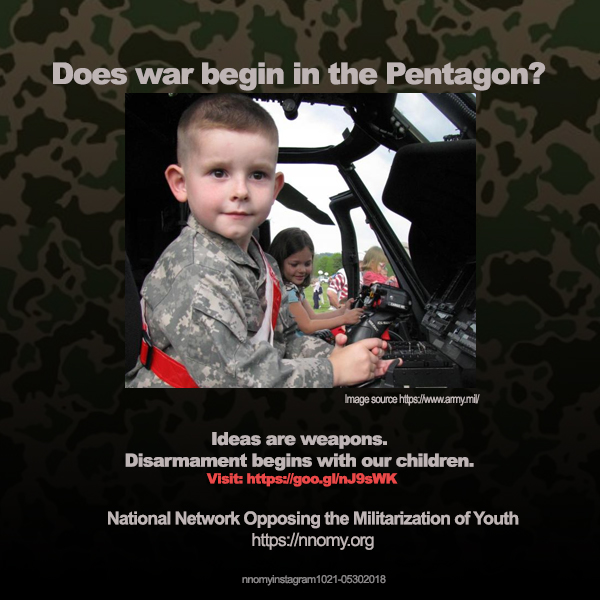 Over the last several decades, the Pentagon, conservative forces, and corporations have been systematically working to expand their presence in the K-12 learning environment and in public universities. The combined impact of the military, conservative think tanks and foundations,  and of corporatization of our public educational systems has eroded the basic democratic concept of civilian public education.   It is a trend that, if allowed to continue, will weaken the primacy of civilian rule and, ultimately, our country’s commitment to democratic ideals. Source: http://savecivilianeducation.org/

How does it affect you?

The most aggressive outside effort to use the school system to teach an ideology with ominous long-term implications for society comes from the military establishment. Over the last two decades, with relatively little media coverage or public outcry, the Pentagon’s involvement in schools and students’ lives has grown exponentially. Now, for example:

Next: Why does NNOMY matter?

Teaching About the Wars

Teaching About the Wars breaks the curricular silence on the U.S. military engagement in Afghanistan and the Middle East. Even though the United States has been at war continuously since just after 9/11, sometimes it seems that our schools have forgotten. This collection of insightful articles and hands-on lessons shows that teachers have found ways to prompt their students to think critically about big issues. Here is the best writing fromRethinking Schools magazine on war and peace in the 21st century.

Teaching About the Wars is divided into five chapters:

Introduction: Breaking the Silence on War
The Road to War
The Human Face of War
Military Recruitment
Anti-War Resistance