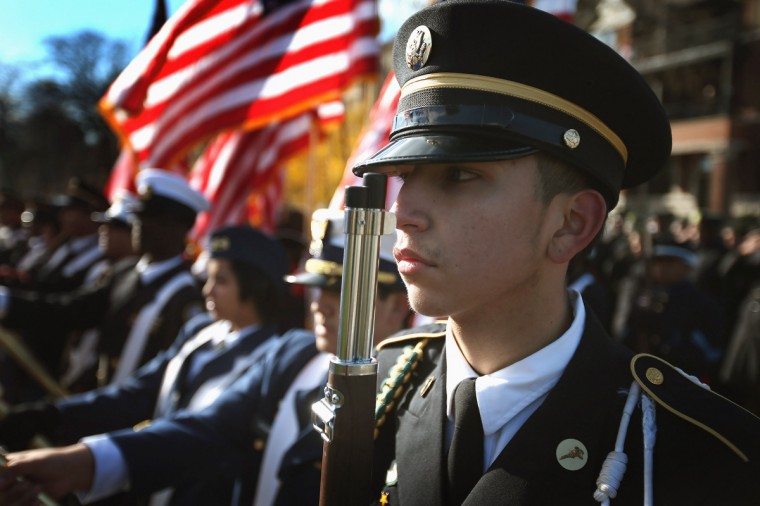 Junior ROTC is an alternative form of high school education in the U.S. that's often focused on students in urban and low-income communities. In 1980, Franklin Military Academy opened in Richmond, Virginia, as the first public military high school in the country. The U.S. Marine Corps has since led the charge to expand the network of military-based high schools and in 2009, Congress passed policies to increase the Junior ROTC units from 3,400 to 3,700 over the next 11 years. Source  (3501 unite as of 2022)

With financial and political support of democratic leaders, particularly Raum Emanuel, the military will add to its controversial Marine run high school with high schools for the other services: Chicago Military Academy-Bronzeville (Army), Carver Military Academy (Army), Phoenix Military Academy (Army) and Rickover Academy (Navy). Marine Military Academy is the nation’s first public Marine Military Academy. It is an astonishing policy decision made with little debate or consideration of its implications or propriety. Rather than improve our public schools, leaders will embraced charters schools and other gimmicks that distract from the overall problems affecting the majority of students. Militarizing public schools is only the last of these gimmicks and stands as a great departure from the model of a single uniform education for child. Source

The U.S. Marine Corps is wooing public school districts across the country, expanding a network of military academies that has grown steadily despite criticism that it's a recruiting ploy.

The Marines are talking with at least six districts — including in suburban Atlanta, New Orleans and Las Vegas — about opening schools where every student wears a uniform, participates in Junior ROTC and takes military classes, said Bill McHenry, who runs the Junior ROTC program for the Marines.

Those schools would be on top of more than a dozen public military academies that have already opened nationwide, a trend that's picking up speed as the U.S. Department of Defense looks for ways to increase the number of units in Junior ROTC, which stands for Reserve Officers Training Corps.

"Many kids in our country don't get a fair shake. Many kids live in war zones. Many kids who are bright and have so much potential and so much to offer, all they need to be given is a chance," McHenry said. "If you look at stats, what we're doing now isn't working."

Last year, Congress passed a defense policy bill that included a call for increasing the number of Junior ROTC units across the country from 3,400 to 3,700 in the next 11 years, an effort that will cost about $170 million, Defense Department spokeswoman Eileen M. Lainez said. The process will go faster by opening military academies, which count as four or more units, McHenry said.

Other military branches also are aiming to increase their presence in school hallways, but the Marines are leading the charge. Source

These military academies are part of the Junior Reserve Officers' Training Corps (JROTC) program, and are partly funded by the United States Department of Defense. Chicago with six academies has more than any other city, a third of all in the country.[2]

Here are some recommended links available to better inform you about Public Military Schools. This is a work in progress and NNOMY will be adding new documents as they are prepared and as policies change that effect enlistment. Check back periodically.