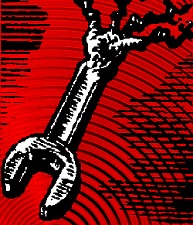 Over 100 activists were present in Philadelphia the weekend of June 25-27 to officially christen the new National Network Opposing the Militarization of Youth (NNOMY). Born from a proposal made at the "Stopping War Where It Begins" counter-recruitment conference held a year earlier in Philadelphia, NNOMY is an effort to bring together the growing number of organizations and activists who are working against the militarization of young people in communities across the country. Participating in this first NNOMY conference were people from California, Colorado, Connecticut, District of Columbia, Hawai'i, Illinois, Kansas, Maryland, Massachusetts, Minnesota, New Jersey, New York, North Carolina, Oregon, Pennsylvania, Vermont, Washington and Wisconsin.

Most of the conference participants represented organizations that have officially become network members or are considering doing so. Approximately 30 local, regional and national groups have joined so far, some of which are: Veterans for Peace, Fellowship of Reconciliation, Youth Activists/Youth Allies (NY City), Central Committee for Conscientious Objectors, Pax Christi USA, CHOICES (D.C.), Project on Youth and Non-Military Opportunities (San Diego), American Friends Service Committee, Madison Area Peace Coalition, Teen Peace in Port Townsend (WA), Los Angeles Coalition Opposed to Militarism in Our Schools, Not in Our Name, Resource Center for Non-violence in Santa Cruz (CA), and Committee Opposed to Militarism and the Draft. Additional memberships are pending from various other organizations.

To promote more effective networking and organizing, caucuses were formed at the conference around issue and identity themes, such as women in the military, Latinos, draft-related issues, rural organizing, people of color, youth of color and LGBTQ (Lesbian, Gay, Bi-sexual, Transgender, Questioning). To broaden representation in decision-making, caucuses were invited to apply for membership status that is equal to regular organizations, and some were included in a NNOMY steering committee. Ten organizations and six caucuses were unanimously approved for the steering committee, which will make between-meeting decisions that are subject to review by the larger body of voting network members. Also adopted was a proposal from the youth caucus to have at least two steering committee members younger than 25, and to pursue the goal of majority representation by both youth and people of color.

NNOMY will continue to grow and develop plans, but an immediate course was set at the conference to pursue two goals: facilitating further development of organizing and educational resources, and promoting regional training of counter-recruitment organizers. For the near future, conference participants volunteered to collaborate on some specific resource development projects, and regional caucuses met to discuss what they could do to carry out networking and training in their geographical areas. Progress in these and other areas will depend on additional post-conference communication, so the contact information for participants will be incorporated into the Stopping War email list that was established after the national conference held in 2003. Caucuses will have their own communications networks and will, hopefully, continue to work on the special issues that brought them together.

One important facet of NNOMY is its commitment to including and supporting the various communities that are especially affected by military recruiting and the violence of militarism, including people who are victims of the military's homophobia. And since the conference dates overlapped with gay pride celebrations nationally, special materials were given to conference attendees on issues relating to militarism and sexual identity. An exciting music/spoken word event was also organized and hosted by the Attic Youth Center in Philadelphia, one of the few Queer youth centers in the country.

The NNOMY conference itself was co-hosted in Philadelphia by the American Friends Service Committee and Central Committee for Conscientious Objectors. Conference planning and other tasks were shared by a number of groups that had served as an ad hoc steering committee, but the AFSC Youth and Militarism Program office provided the bulk of the on-site resources and logistical support, including the Friends Center where the conference was held.

It was especially appropriate that the founding meeting of this network occurred in a city where some of the most important revolutionary events occurred in U.S. history and within days of the anniversary of the Declaration of Independence. While some of the decisions that went into the formation of the U.S. government over 200 years ago were tragically inconsistent with the ideals of liberty and justice for all, one thing that many of the country's founders got right was their perception that the growth and influence of a large military establishment would undermine civil society and progress toward democracy. Over the last 60 years, this lesson has been largely forgotten, and the traditional controls over the military that were once seen as necessary and even taken for granted have greatly eroded. In addition to the considerable influence that the Pentagon has over government decisions (including economic ones), our most important institutions of socialization, the public schools, are being overrun by people in uniform teaching military values, and popular culture is being saturated with messages that popularize soldiering and war. We are rapidly approaching a point where the long-term effects of militarization will be extremely difficult to reverse. A massive effort is needed to turn the trend around, and NNOMY is a crucial step in that direction.

The conference in Philadelphia was a time of sharing, discussing, strategizing and planning that left us at the end with an important opening to build a movement that speaks to the needs of constituencies that have traditionally not been reached very well by the U.S. peace movement. And because it focuses on interrupting the flow of human resources and challenging the mechanisms of propaganda that are needed to wage war, it is an effort that also offers people an effective way to move from war protest to war resistance, while at the same time working for long-term social transformation.

This article is from Draft NOtices, the newsletter of the Committee Opposed to Militarism and the Draft (www.comdsd.org)