The Maimed – On Eleven Years of War In Afghanistan 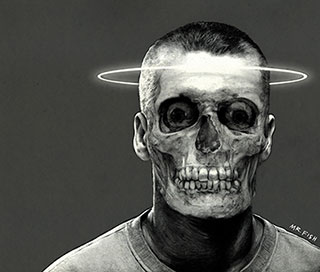 Many of us who are here carry within us death. The smell of decayed and bloated corpses. The cries of the wounded. The shrieks of children. The sound of gunfire. The deafening blasts. The fear. The stench of cordite. The humiliation that comes when you surrender to terror and beg for life. The loss of comrades and friends. And then the aftermath. The long alienation. The numbness. The nightmares. The lack of sleep. The inability to connect to all living things, even to those we love the most. The regret. The repugnant lies mouthed around us about honor and heroism and glory. The absurdity. The waste. The futility.

It is only the maimed that finally know war. And we are the maimed. We are the broken and the lame. We ask for forgiveness. We seek redemption. We carry on our backs this awful cross of death, for the essence of war is death, and the weight of it digs into our shoulders and eats away at our souls. We drag it through life, up hills and down hills, along the roads, into the most intimate recesses of our lives. It never leaves us. Those who know us best know that there is something unspeakable and evil many of us harbor within us. This evil is intimate. It is personal. We do not speak its name. It is the evil of things done and things left undone. It is the evil of war.

We do not speak of war. War is captured only in the long, vacant stares, in the silences, in the trembling fingers, in the memories most of us keep buried deep within us, in the tears.

War gives to its killers a God-like power to take life. And there are those here tonight that have felt and exercised that power. They turned other human beings into objects. And in that process of killing they became objects, machines, instruments of death, war’s victimizers and war’s victims. And they do not want to be machines again.

We wander through life with the deadness of war within us. There is no escape. There is no peace. We know an awful truth, an existential truth. War exposed the lies of patriotism and collective virtue of the nation that our churches, our schools, our press, our movies, our books, our government told us about ourselves, about who we were. And we see through these illusions. But those who speak this truth are cast out. Ghosts. Strangers in a strange land.

Who are our brothers and sisters? Who is our family? Whom have we become? We have become those whom we once despised and killed. We have become the enemy. Our mother is the mother grieving over her murdered child, and we murdered this child, in a mud-walled village of Afghanistan or a sand-filled cemetery in Fallujah. Our father is the father lying on a pallet in a hut, paralyzed by the blast from an iron fragmentation bomb. Our sister lives in poverty in a refugee camp outside Kabul, widowed, desperately poor, raising her children alone. Our brother, yes, our brother, is in the Taliban and the Iraqi insurgency and al-Qaida. And he has an automatic rifle. And he kills. And he is becoming us. War is always the same plague. It imparts the same deadly virus. It teaches us to deny another’s humanity, worth, being, and to kill and be killed.

There are days we wish we were whole. We wish we could put down this cross. We envy those who, in their innocence, believe in the innate goodness of America and the righteousness of war and celebrate what we know is despicable. And sometimes it makes us wish for death, for the peace of it. But we know too the awful truth, as James Baldwin wrote, that “people who shut their eyes to reality simply invite their own destruction, and anyone who insists on remaining in a state of innocence long after that innocence is dead turns himself into a monster.” And we would rather be maimed and broken and in pain than be a monster, and some of us, once, were monsters.

I cannot heal you. You will never be healed. I cannot take away your wounds, visible and invisible. I cannot promise that it will be better. I cannot impart to you the cheerful and childish optimism that is the curse of America. I can only tell you to stand up, to pick up your cross, to keep moving. I can only tell you that you must always defy the forces that eat away at you, at the nation — this plague of war.

Towering about us are banks and other financial institutions that profit from war. War, for some, is a business. And across this country lies a labyrinth of military industries that produce nothing but instruments of death. And some of us once served these forces. It is death we defy, not our own death, but the vast enterprise of death. The dark, primeval lusts for power and personal wealth, the hypermasculine language of war and patriotism, are used to justify the slaughter of the weak and the innocent and mock justice. … And we will not use these words of war.

We cannot flee from evil. Some of us have tried through drink and drugs and self-destructiveness. Evil is always with us. It is because we know evil, our own evil, that we do not let go, do not surrender. It is because we know evil that we resist. It is because we know violence that we are nonviolent. And we know that it is not about us; war taught us that. It is about the other, lying by the side of the road. It is about reaching down in defiance of creeds and oaths, in defiance of religion and nationality, and lifting our enemy up. All acts of healing and love — and the defiance of war is an affirmation of love — allow us to shout out to the vast powers of the universe that, however broken we are, we are not yet helpless, however much we despair we are not yet without hope, however weak we may feel, we will always, always, always resist. And it is in this act of resistance that we find our salvation.